Hip hop gospel rapper, Jahaziel hails from UK. I previously heard of him in a song collaboration with Daniel Bedingfield. Somehow thanks to someone, I ended up in possession of his killer mixtape titled, The Still Livin’ Mixtape, released on May 2011. Its content is rich and alive owing to the diversity 17 tracks; 14 out of them conspicuous collaborations with various artists including Mali Music.

If you dig Hip hop, lyrical punches and funk, this mixtape is perfect for you irrespective of whether you believe in the word or not. It’s message has been uniquely packaged in songs about ordinary stories and life’s challenges intertwined in prayer and praise to God. Jahaziel embraces his Jamaican roots when he throws in ‘Deliver me’, a reggae song smack in the middle of head-bopping Hip hop. ‘Be not deceived’ is a song emphasising on the need to be wary of the world’s dangerous pleasures like greed, lust and money for, ”What a man sows he will reap, the same way he will eat what he grows,” raps Jahaziel.

The remix to ‘Come home’ sounds as fresh as a track off Lupe Fiasco’s Lasers. The song is a tale of a man sliding from his faith. In spite of his dark life he discovers that there is still a mansion for him next to where the Lord lives. Lost in his spiritual poverty, he asks God how that could have been possible, and He answers, “Christ paid your mortgage”. TOO DEEP!

Jahaziel’s British accent sipping through the songs is sexy! (Not too sure if that description is fit for this kind of post 🙂 Anyhoo, I loved all the verses in ‘Regenerated’ – a monster collabo! “I can set it off with the obvious line and say that I’ve been transformed something like Optimus prime but far from this rhyme is my gospel design to give God the optimum shine…”  SWEET!

The consistency of the lyrical semantics of the mixtape will blow your mind! I am unable to review all the tracks because I am both spoilt for choice and overwhelmed by Jahaziel’s litu-message of vote of thanks in the mixtape–poetic, poignant and plain inspirational. I copied an except of it, word for word and pasted it below. His words are so beautiful leaving me with nothing to say other than, Il faut partager! 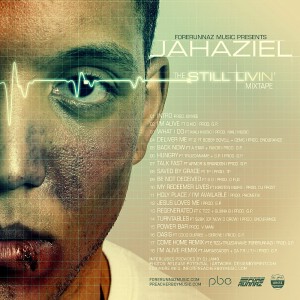 I’ll keep it short and sweet

Thanks goes first, foremost and utmost to Almighty God – you already know – without whom life would be lifeless. Thank you for showing me more love than I could ever understand let alone reciprocate, in sending your Son to suffer my sinners death and give me His righteous life for eternity.

Thank you to Nadine my wife and Azaliah my daughter – having both a queen and a princess truly makes me feel like a king! I love you both dearly and may I never be a better rapper than I am a Christian husband and father.

BONUS: The mixtape comes after his debut album, “Ready to Live”, which I am yet to get my hands and ears on as I wait on the release of his sophomore album. Feels like I began to know him from the middle going in and outwards. No matter your style, I am recommending this mixtape. Click The Interview of Jahaziel by snowdroponline.com