I should be arrested for not having French toast while in Paris. But life is meaningless without breaking rules or committing any crime. Excuse me but I hardly ever have breakfast while in Europe or any other foreign land. I normally need at least a month to adjust to new places. I am normally sleeping in during breakfast time. Brunch is my thing. Plus I eat so many yummy baguettes in Paris.

On my second day in Paris, I am hanging out with my friends. We are pressed for time. There’s so much to do but such little time. Instead of visiting several museums and some romantic places like Pont des Arts, the romantic lovers’ bridge with countless padlocks; I’ve decided that we are going into town to find a great restaurant serving some good food.

with Sylvia, Nynke, Steve and Chimano – the usual suspects. It’s a warm Sunday afternoon, and somehow most restaurants aren’t opened but we are determined to get a nice place to eat. We finally end up at café Benjamin, not too far from The Louvre. We sit by the patio and it’s perfect because we can feel the warmth of the shy sunshine and glimpse at fashionable street walkers (no pun intended). I want to have Steak-frites, a common dish served in Brasseries throughout Paris and Europe.

The waiter at Le Benjamin is so jolly it’s insane. He looks like a Chinese yet he can’t speak good English or French. He keeps shouting while talking gibberish and laughing out loud for no reason. ‘I really want what this man is having,’ I tell myself. Our food accompanied by a couple of glasses of beer, wine and espressos arrives. It’s all heaven. We savour it down as if it is our last day at eating as we exchange global stories from our respective countries: Netherlands, Kenya and Sweden. 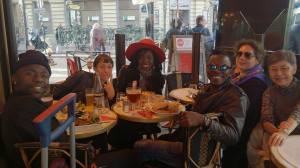 It’s also Papa’s birthday – Steve’s bro in Mombasa. Steve pulls out his cell phone and we all record for him a Happy Birthday song. This distracts the elderly couple sitting next to us. They are Chinese and ask us where we are from and what brings us to Paris. We start to exchange stories. They say that they’ve been in Paris for the past two weeks and today is their last. They are excited to hear that some of us are from Kenya because they’ve been to Kenya’s Maasai Mara once and they loved it. They look like a stinking rich duo from China – travelling the world in 365 days. “We travel a lot,” the lady says, adding, “It had been a while since I returned to Paris, The last time I was here I was 14 years old.” She’s now in her 80s but looks like she’s 65—what good life does to you.

Later on in the night, we join the rest in visiting Sacré-Cœur Basilica, located at the highest point in the city. Walking down from the basilica, I am astounded by the beauty of Paris bistros located along the narrow roads down the hill from the basilica. We find an Italian restaurant where we have some really dope Italian and French food. Funny thing, we have had such a long day and a lot of wine that nobody cares to check the restaurant’s name. It’s located on the right side of Montmarte hill if you’re heading down along Rue des Martyrs, one of the busiest streets of shops and cafes in Pigalle area.

I have eaten the most steak I have had in my life in the three nights I’ve dined in Paris. I want more spice and chillies and the waitress presents me with an oily wine chilly in a bottle. “Just pour on your food,” she instructs. We dine with Cleopatra, the awesome lady who has played an instrumental role in organizing our trip to France. She’s so cool and classy and tells me a lot of stories about living and dining in France. For instance, the French don’t serve sausages or frites for breakfast. In other words, this is no city for chips funga – only love.

A few days later, I pass by Lille, a lovely city north of France. I am not a sweet tooth but decide to try out a pretty little cup cake from a bakery at the shopping mall. It’s the most explosive little thing I have ever encountered. Bursting with freshness and goodness, I even discover some sweet gel inside of it. France has restored and fed my appetite.

In the flight back to Nairobi, while leaving Paris, I am stuck in a flight headed to Seychelles via Abu Dhabi. Several Korean and Chinese people are inside. They must be tourists globetrotting. The hostesses have served me the best potato salad in the world. I wish I could ask or more or ask someone for theirs. But I am embarrassed. As if the gods really do hear us out, the Korean man sitting behind me taps me to hand over their salad. Like a silent mafia transaction, he doesn’t say anything other than hand it over and I don’t say anything other than receive it. People only offer you food when you ask or if you look like a street child or beggar – things I don’t look like. I don’t know why he gave me his food but anything Paris gave me – I gobbled it down without a second thought.

Thank you Cleo and Brenna for being such awesome company and guides.

BONUS: A survey of over 500 people through rsvp.com.au considered French food to be a turn on and a French restaurant was more romantic than an Italian meal. And the fact that French people care less for how much you eat is my driving force. The customer service I received was delicate and delivered with tender care, almost as if I owed the restaurants something.

Read the complete To and Fro Paris with Love series:

To Paris with Love (Part I)

To Paris with Love (Part II)

From Paris with Love: The Eiffel Tower (Part I)

5 thoughts on “From Paris with Love: French Cuisine (Part IV)”