Black roses makes way for Sara Mitaru in a celebration of the blog’s 100th post and the first single-song review. Listen now! Complete with lyrics saramitaru.bandcamp.com.

This is Sara’s debut single, and only a week old. Make way is fresh and young. However its osmosis effect spreads by the day having already made a twitter TT and several high flying spots on radio. We are at a crucial moment when something’s got to give, even if it means less of ‘mikono juu ya hewa’ songs.

Kenya’s 2011 was a year marred by a crippled economy but a flipside of a sporty entertainment industry. Irrespective of societal roles, all Kenyans are needed to converge in messages that will emit positivity. Sara is doing her part and the longevity factor of ‘Make way’ can be felt.

They say we’re independent but they won’t set us free, they say we are sovereign but we are shackled and chained … But there’s a man down, head down with no food on his plate… Make way for the people today, make way liberation will say.

I want to storm into parliament and sing this line to all the politicians. That’ll probably get me arrested. So I want every youth to hear it and know that voting is either paving way for change or conformity. It oozes optimism for the dejected citizen in the world. It’s simply a case of ‘love at first listen’.

The song is a beautiful island. It has no country’s particular musical stamp, giving it more of a world-music feel. The instrumentals in the first 30 seconds are alluring, a fusion of the piano, bass guitar and various strings. About 45 seconds later, Sara’s singing is a marriage of sorts…with the band. The strong beat will leave you bobbing your head if not tapping your feet. 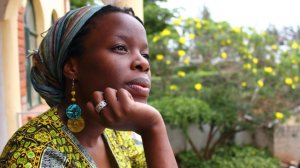 Sara sings about a lot of things, from love, maziwa lala-yes, the plight of children and women to emancipation. Her debut album will be out in 2012, potentially the most befitting gift anyone could get me in this century.

She is also appointed as a UN messenger of truth and an advocate of the UN MDGs. In modesty she speaks of her conviction, “It’s not the title but the ability to sing freedom songs in different spaces where voices will be heard.”

Sara is powerful. Her voice is peanut butter smooth, and sweet, enriched with husky bits. If a secret society kidnapped you and left you in the dark (not that you’d notice) you still wouldn’t miss the voice. Never mind that some of you haven’t heard her music before.

Written and produced by Blackman, Sara’s producer, ‘Make way’ is a fit freedom song. I see my mother jamming to it at the same measure with the thirsty man sitting under a tree in Uhuru park. It would make a great soundtrack to a movie. Heck it would make a good anthem for Kenyans.

I dream in technicolor! 🌈 On the night before my wedding day, in my dream I saw several struggling mothers come together to form a household and boma that would help all people and visiting relatives. At the end I saw my mum and the dream had a summary and moral that mothers need to be celebrated more. They aren’t celebrated enough. This should be an everyday affair.
Walking into May majestically - like a champ! 💪🏾 Because I am! How better way on this day of celebrating all things hard earned labour and success! You get it - shine all the way to the top but don’t forget to be thankful.
Raha Jipe Mwenyewe 🥰🥰🥰
My people please check out the remix of "Easy" by @gemmamusic_ feat. @iamchimano out now! ❤
What a wonderful season of successful meetings and all that I planned. It all started with embodying positive vibes from the very start.
Sunday Sermon.⁠