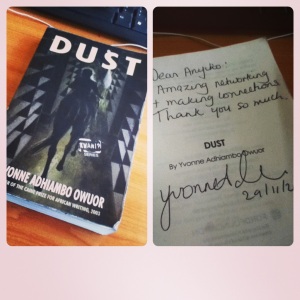 Dust is a strong literary sign of a new breed of Kenyan writers to reckon. The sophistication with which Yvonne writes is not for English-starters. She’s got many great quotes like, “To name something is to bring it to life”; and melodic lines like, “Selene returned to Kenya in tears, just as the Nandi flame trees were in Crimson blossom.”

Well-articulated and intricate, Dust comes off as well thought out and thoroughly edited. It’s another feat for Kenyan writers, and Kwani Trust (publishers of the novel). Winner of Caine Prize for Africa Writing, Yvonne Adhiambo Owuor released her debut novel in a mighty cool event hosted by Kwani Trust in December of 2013, just as Kenya was about to celebrate her 50th anniversary. Dust wouldn’t have come at a better time as the book’s storyline revolves around various sociopolitical issues that Kenya has faced in the past 50 years.

Moses Odidi Oganda, a middle-aged brilliant mind turned thug, is shot in cold-blood by police after a cat and mouse chase on the streets of Nairobi. The sudden death shocks many and leaves his family left with a great loss. The general election results are announced and a president declared despite harrowing evidence of rigging. Odidi’s family gather in Wuoth Ogik, in the outskirts of Northern Kenya to bury their son. It’s a journey that takes the characters and readers into another world, of discovering untold stories, secrets and a family’s heritage that includes Kenya’s history.

Straight from the Mau Mau uprising, to the promise of a new nation, Dust’s climax mainly revolves around Odidi’s only sibling Ajany. While the nation struggles with untangling herself from challenges of development and modern-day struggles like corruption and devolution, Ajany is searching for her brother’s lost life. “My stories sip from rich human repository, and also cater to my obsession with guessing reasons for human choices and their consequences—particularly the bad ones,” says Yvonne of her love for featuring history heavily in her literature.

The beauty of how Yvonne’s storyline is intertwined is phenomenal. Every character the reader encounters is a link to another. And through their lives, the reader is enthralled by the history of a coral-coloured house and all kinds of love, including the forbidden. Through the book, the reader is introduced to magical Kenya. From the terrains of Naivasha, all the way past the deserts of Turkana, Kenyan destinations have never been painted as marvellously.

By the time Odidi is finally laid to rest, so is the weight most characters in the book carry. I really want to expound on this but if I do, I will spoil a major one. Let me just put it this way—I really enjoyed the strength of Yvonne’s characters. They were the essence of grit and strength.

Dust is highly recommended for literature buffs and those who want to discover a new writing style. And the best past of it all is, Dust starts on a high note and ends in an even higher and dramatic one. A must read!

BONUS: Dust was first released and published by Kwani Trust in December 2013. It’s available for sale via Amazon or in any leading bookstores or Kwani offices in Kenya.