Bergen, in Holland (about 45 minutes drive from Amsterdam), is really the place you want to wed. There, roads are winding, extra leafy trees stand tall and close together, the beaches provide warm and sunny weather; and houses (all stand out, in shape and architecture) are designed to build homes. Mine is the only bedroom (I think) located on the lower floor of the little yet charming 114-year old Hotel 1900 (where we are staying over the wedding weekend). It’s the most beautiful Saturday morning I have seen, since my arrival in Netherlands. A bright shy sun light with tenderness and assurance seeps in through my window. I know this will be a more than a good day. 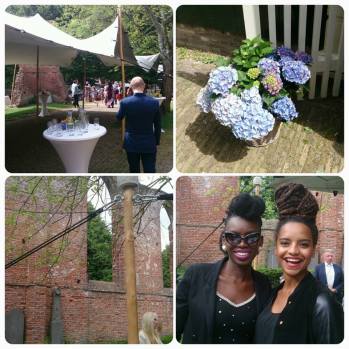 From Hotel 1900, it’s a five-minute walk to the most beautiful remains I’ve ever seen—Bergen’s Ruïnekerk (Ruined Church). Surrounding the chapel’s front yard are high ruined walls made of golden brown bricks. The walls have holes, where there used to be cathedral windows. Epitaphs lean on the walls, as lifeless as high fashion models pose. A clay pot with lovely lilac and white flowers is sitting pretty near the church’s main entrance. The church provides a Holier Than Thou aesthetic gratification. The ceiling is so damn high (even higher than normal cathedral ceilings). Half its length is wooden brown and the other half – painted pure white. The windows are so large – all four Teletubbies could certainly jump through, at once. Several golden chandeliers dangle with church candles, or lights shaped as candles, burning slowly. In the fifteenth century, this used to be the largest church in the province of North-Holland. However, during the 80 years war against Spain, it was looted and burned down by Dutch Protestants. It was later rebuilt to its current state (making it now more than 300 years old). Wow!!! 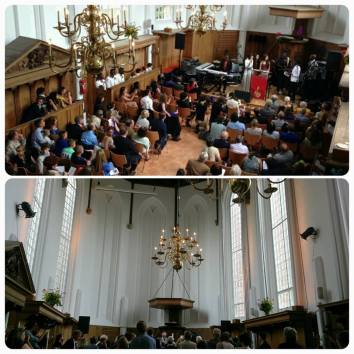 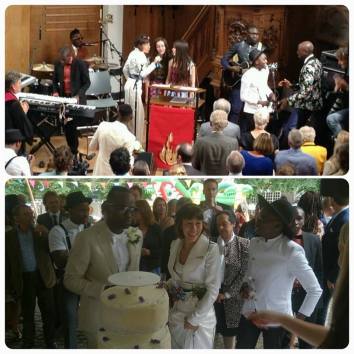 It’s about 3:00 p.m. The Bridal March song goes off. Dressed in a simple non-lacy and non-flowing wedding dress with a white mini jacket and a statement Ankara belt, Nynke (the bride) walks in smiling. Her Dad is holding her hand. Such cute little flower girls in Ankara dresses just walked in front of them. Her man, Steve (the groom), is dressed in a cream-coloured tuxedo, a snow-white shirt with a matching smart bow tie. A twosome so different yet elegant—I assert – to myself, “Yes! Those are My Friends!”

After what sounded like a Catholic mass and mostly conducted in Dutch, Nynke and Steve are just about to be married. The Father asks, in English, “Anyone with any reason why I should not unite these two; speak now …” A bad, or good joke (we previously discussed) comes into real play. From the very back, Bien stands up and shouts, “I have something to say!” All eyes on his serious face: “I know Nynke … She is a very good woman – that’s all!” The church bursts into laughter, more like a collected sigh of relief. After the You May Kiss the Bride speech, the couple kisses for an eternity. I like that the Father’s sermon for the couple is sweet and very Catholic-esque short. “You don’t need sunshine but someone by your side, always. Look out of the window, we expected better weather today but you don’t need blue, but trust… ”

Later, Steve sings to Nynke an acoustic (only accompanied by a piano) version of Donny Hathaway’s A Song For You. (Isn’t that like one of the sweetest love songs ever?) She surprises him, and all of us, when she sings for him an olden (I think) Dutch love song, from the balcony of the church, accompanied by the beastly organ music instrument. Even though I can’t comprehend the lyrics, I feel the emotion pouring out of her, and then from me. I’ve never heard Nynke sing with such heart and soul. My eyes feel like I just rubbed red-hot Indian chillies on them. I feel like running out of the chapel to be free of this captivity. I look around the church and all (Yes – all) the women are sobbing – so I succumb. It’s embarrassing, but thankfully I didn’t wear mascara so I am not worried that I will look like the grim reaper after this. I told myself that I wouldn’t cry but these tears turn out to be my first, at any wedding.

Sauti Sol throw a killer concert right in front of the church’s dais, transforming the peace and holiness into something else. They sing all their wedding songs and Pharrell’s Happy, led by Nynke. Later Steve and Nynke’s Paps both give such precise and wise speeches—I am awed. So is the church. There’s too much love, fun and freedom inside this Catholic church—I can’t wait to tell my mum (a staunch Catholic) of this liberty. 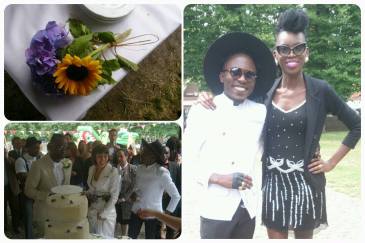 After a few minutes, there’s a cake cutting ceremony at a gazebo outside church. The cake has several storeys. Its colour matches Steve’s tux. It tastes like sorbet and everything nice. This is the first wedding I’ve attended without cake-hoarding servers. It’s a dream-come true for the kids. It doesn’t matter that I hate cake; I join their greedy game of relishing large portions to come back for more.

Going around is plenty of champagne, congratulatory hugs and kisses to the couple, meet-and-greet pleasantries, and fashion. It is about 6:00 p.m. guests return inside Ruïnekerk for dinner. The church space is now like a scene from Jesus’ Last Supper table. The tables, laced in white cloth, have gourmet Kenyan and Indonesian (if my taste buds don’t fail me) finger-licking dishes. Sierano and me even share a second plate. Just as the wine is kicking in, Nynke and Steve are at the front of church with an announcement to make. But only a music mix kicks in, for a choreographed dance session from the two, now in different outfits. There isn’t one cool dance move that misses out. It’s super dope! Suddenly, guests are standing on seats, and cramming, trying to steal a picture or if lucky – get a video.

A group of friends then present a song and another choreographed dance to the couple, who join in the FUN. The after party (from a sunny and bright Summer 9:00 p.m.) is private and by the beach. The wooden white coloured establishment exudes the feel of a former beach house. The walls are made of glass. There’s a patio with a view (overlooking the vast North Sea) to die for. This is a scene off OC. The sand here is so clean and so soft it makes feet sink so deep. The water is super cold. Only sound close to the North Sea is the laughter from the party, fading music and water-sand back and forth motion as tides rise and fall. Good vibes, drinks and a lot of dancing to the killer DJ and the most private and heartfelt concert delivery I’ve ever heard Sauti Sol give. 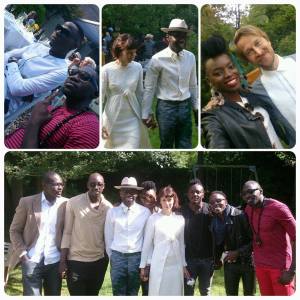 After a super cute daughter, and years of anticipation, Nynke and Steve have finally made it official. Nothing about this couple is ordinary. She is super cute, super hardworking and super stylish. Steve’s voice and everything is smooth. He’s fashion forward and super industrious. Look up Free Spirit and Roho Safi in the dictionary—their faces show up. They are creative. Crazy. And fun. And accommodating. And loving. They’ve got such big hearts; if merged together and thrown like a meteorite from space into earth, they would form a love crater.

Weddings generally make you feel sorry for yourself and your singlehood or dysfunctional relationships. But this one felt different. It was more of a global gathering of friends and family—guests came from Netherlands, Germany, Kenya, Brazil, USA, Dubai, Czech Republic, France and pretty much every corner of the world. It was surreal to be at one place with ALL our friends, and for it not to have been a funeral.

There was nothing to think about but savour every single moment. More than Nynke and Steve’s celebration of love, their wedding was a massive and grand celebration of love, life, friendship and family. It ended up lasting another two days, following Sunday (back at Ruïnekerk) and Monday (at the Bergen home).

BONUS: So honoured and glad to have been part of your celebration Nynke and Steve – congrats to that and the awesome wedding dance. Because of your wedding, I ended up spending weeks [meaning it’s not infatuation] falling in love with Netherlands; reuniting with you, nearly all my friends from Europe and making new alliances. I am so inspired by the power of the beautiful thing we are all looking for. It’s called Love, and You are it!!

5 thoughts on “Wedding Of The Year: Congrats Nynke x Steve”