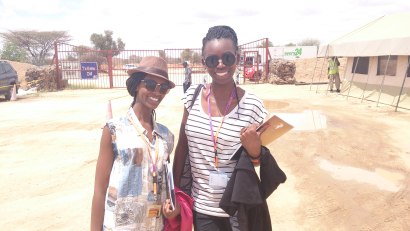 On my first visit to Turkana, I am lucky to be visiting Tullow Oil—leading independent oil and gas exploration and production group that has pitched tent in Kenya’s remote Lokichar area since around 2012 (soon after the first announcement of oil discovery in Kenya).

There has been intense interest in the country’s oil and extractive sector and even more mystery surrounding exploration groups like Tullow Oil. Not much about their operations and the kind of deal they have with Kenya’s government, especially relating to incentives for the locals of Turkana when and if the business makes returns, is public information.

The journey to Lokichar, Tullow’s base in Turkana starts from Lodwar as early as 5 a.m. We arrive at around 10.00 a.m. This is part of FoLT (Friends of Lake Turkana) plan of activities for us during their first Natural Resource Conference this week, where I am working as one of the communication consultants. It’s the roughest road trip I’ve ever had. Pedo, our driver from Lodwar, seems to be thrilled by the bumping and grinding; because the worse it gets, the faster he drives and blasts some crazy hip hop that you wouldn’t expect to be blaring off a Turkana Land Rover. Like older 50 Cent and the likes. 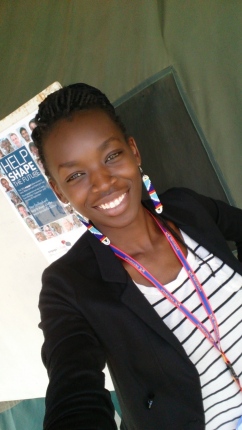 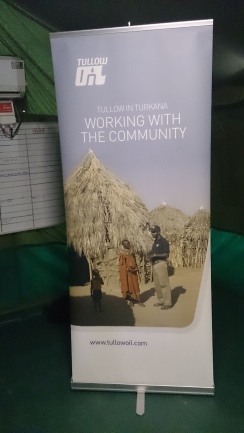 It’s so hot, I envy a Turkana woman I see walking bare-chested as our entourage of big cars blow off desert dust blocking anyone from seeing her from the back. After passing a few villages and being shown some water tanks set up by Tullow Oil by our guide, we have arrived at the exact place where Tullow rocks Turkana oil.

It’s a large space – about 12 acres (the size of any one of of Tullow Oil’s camps). I can see are a few large tanks, machines and tents. The security check at Tullow Oil is as strict if not stricter than that of any serious establishment in Nairobi. Cars have to drive at 40 km/h or less – there are security guards all over. As soon as we get into their premise, we are asked not to take any photos (of course I rebel) as we all register our names/companies to be issued with guests tags that we have to wear at all times. As we get prepared for the special orientation at a nearby tent, we are read to ground rules. “Shall you hear a siren, please lie down as there might be a security threat, either from the extraction or tribal wars between locals of the area,” we are also warned.

Today Tullow Oil will demystify itself to us. Turns out that Tullow’s facilitator Huma is an acquaintance of mine; we’ve shared the dance floor a few times during Electrafrique parties at the Carnivore. It’s an awkward coincidence. You don’t really expect to meet the guy you danced with once in Carni all the way in Turkana, for whatever reason. There are professors, filmmakers, journalists and mostly researchers from organisations interested in investing or helping communities from areas with natural resource finding like Turkana, among FoLT guests. 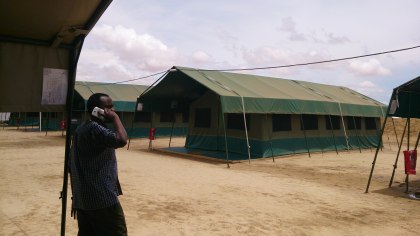 The Tullow presentation starts off on a good foot with Huma doing a lot of PR for Tullow while at the same time opening our eyes and minds with priceless information. For instance, I get to learn that the government grants tenders to explore natural resources all over Kenya to various other similar companies, after which the highest bidder takes it all. Tullow has placed itself strategically as the leader in Kenya’s oil exploration. During their excursions, they have bumped into a couple of other natural resources like water and gas and subsequently handed them over to other companies interested because their main focus is oil.

There are a lot of questions from the audience, concerning the transparency of the tender issuance, what’s in for the locals of Turkana and much more. Do locals know who Tullow Oil is and what kind of permission they have been granted to access local land? At some point, the session becomes so heated that Huma has to stop taking any questions. It’s a very healthy discussion we are having because we are just a cross section of educated Kenyans and professionals who don’t get this new oil business in Kenya; what of Turkana people? Most of who have low literacy levels due to factors such as inadequate infrastructure for education, mobility due to nomadism, economic marginalisation and cultural practices.

By the end of the presentation, we’ve already spent more than five hours at it yet there is still so much to discuss and to expound on. Huma calms my main worries and curiosity by stating that Tullow Oil has hired a number of locals to help communicate Tullow’s mission to Turkana locals on a daily basis. This, and any other means of integration between companies in the extraction of natural resources business, locals of the areas and government policy makers is paramount for so many reasons – the main one being to avoid conflict, now or in the future.

When the session ends, Tullow are kind enough to share with us their presentation and serve us with some luxurious lunch, for Turkana. It’s a four-course meal, complete with ice cream and cookies. Serving ice cream in Turkana really is something like discovering oil in the region—eureka moment!

It’s perfect that Tullow had time to host us and aren’t as hostile or oblivious to circumstances around their Kenyan business as they seem to the outside world. Tullow Oil seems to be working towards compensating the locals of Turkana for their exploits by providing them with water sources and jobs. But is that enough? Is it just a hoodwink mission? And is Tullow just being nice because this is actually the work of Kenya’s government and not theirs? After lunch, we are heading to the local village to meet and discuss with the villagers these same issues…

In the continuation of my tales from Turkana read To Turkana and Back: Villagers of Nakukulas (Part III)

One thought on “To Turkana and Back: Visiting Tullow Oil (Part II)”