2017 was such a great year of African music production! Looking back makes me so happy and proud of our African stars and music! Thrilled that it’s that time of the year when I not only look at what tickled my fancy the most, but what made a mark. Of course there were countless dope songs, it’s unfortunate that they can’t all fit in my list. 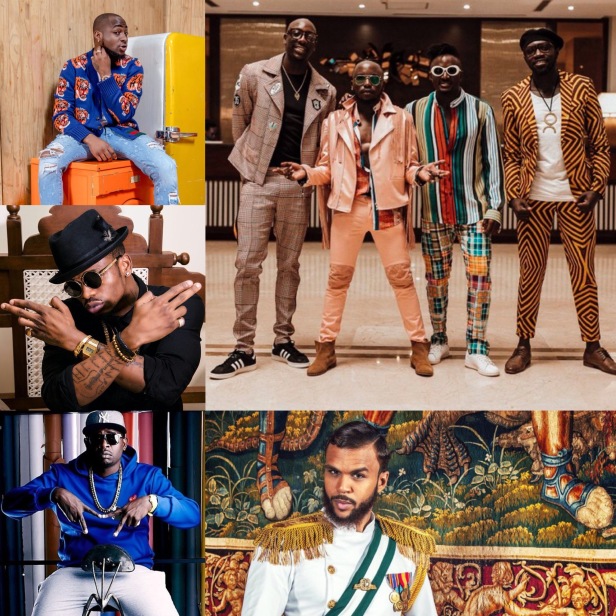 “Ma Girl” by Togo’s Toofan and Patoranking was a commendable track and video! While Kwesi Arthur’s “Grind day” makes me want to hear more of Ghana’s hip hop, the banging “Kutama” by Fik Fameica is a reminder of why Ugandans are reigning champs at delivering dancehall hits in East Africa. In no particular order, here we go:

There is no doubt that both Sauti Sol and Patoranking are among Africa’s best artistes and most talented. Celebrating women of colour, their powerful collabo delivers a strong message – with its lyrical content and creative direction already evoking strong sentiments and controversy. What I love most about the track is that it showcases Sauti Sol’s authentic afro-pop perfectly fused in R&B and Patoranking’s dancehall magic—giving off the best of both worlds. The song, co-written by the talented Kenyan songwriter and singer: Nviiri The Storyteller and produced by Sauti Sol, becomes the debut single off of the group’s upcoming music project titled AFRIKAN SAUCE LP – set for a 2018 release.

I happened to be in Nigeria when “If” dropped (Feb, 2017) and what you might not know, apart from Nigerians, is that this song was an instant mega hit in Nigeria as soon as it landed. The song gradually grew across the continent and into hearts of music lovers to not only become Davido’s biggest new age hit but a precursor to his plethora of mega hits and collabos, released in 2017. Do you think you would have everything you wanted if you had 30 billion in your account? We love this song because it’s addressing our fantasies. It takes more than just promo and being the son of a rich man to deliver such a a massive tune with the year’s biggest singalong lyrics. Davido is truly talented and a star whose trajectory is clearly still on the rise.

I am just wondering why Nasty C and Runtown hadn’t produced a song together all the time, so thank you Coke Studio Africa – 2017 for pairing these two. “Said” is one of the hot original songs brewed at Coke Studio this year but a great example because it perfectly represents the unique styles of Nasty C and Runtown. Apart from unifying rap and afrobeats fans across the continent, “Said” also encompasses a new school classic sound perfectly fused in contemporary African music influences, making us feel closer to the song, and these two – like never before. What I love most about it is bringing to the fore front, a dope music maker – top producer Shado Chris from Ivory Coast.

Every year since 2015 Wizkid comes out with a big tune that gets the world jiggy on the dance floor and media hot on reviews. This year’s gem was “Come Closer” alongside Drake, his 2016 collaborator. In “One Dance” fans felt cheated by not actually hearing Wizkid sing a verse but when we could finally hear Wizkid sing and Drake rap-sing in one track – “Come Closer” got a tumultuous reception. Even though the final product sounds so effortless, these two must have worked so hard to deliver yet another world-class afrobeats track.

In 2017, DJ Maphorisa was king of juggling his status as top African music producer while working on his personal music career and brand – with that releasing a new album “Gqom” and a documentary that premiered on Apple Music. Authentically representing sounds from South Africa, Maphorisa and his carefully selected crew, deliver an excellent dance electric song in “Midnight Starring”. It’s the kind of production that flaunts Maphorisa’s knack for pioneering dance sounds and one that will allow you to show off your dance moves. Look out for South Africans dancing to this!

When it comes to the highly competitive Tanzanian music industry, Alikiba doesn’t get caught up in trends or battles to try stay on top. His releases are rare, strategic and well calculated. “Seduce Me” is a bonafide laidback banger and a new age bongo hit cleverly laced in caribbean vibes. As others struggle to stay on top of their game, Alikiba probably has already recorded his next three songs to last until 2020 🙂

Off his 2017 album – Thuto, “Tito Mboweni” is all about the cars, money, women, fast jets and high lifestyle. I don’t fancy these type of hip hop tracks and videos as most rappers are out there flaunting while they actually live fake lives. But Cassper, one of the hottest MCs in Africa, is the real deal, and if anyone was so deserving of such bravado in a track – he’s got a free pass. After all, he recently made history by filling up Africa’s largest stadium – FNB Stadium and performing in front of 68,000 concert goers, with that outselling other international acts such as Justin Beiber who have performed at the same venue before.

For Diamond 2017 was the year of delivering his biggest international collaborations yet. Featuring Tiwa Savage, NE-YO and Rick Ross, among other top acts across the globe – “Hallelujah” takes the crown for Diamond’s most musical drop and his fastest video to garner the most YouTube views in 24 hours, having clocked over 2 Million in it’s first day. Coming from a Muslim background, the ‘Hallelujah’ title and lyric sparked controversy but you can all give Diamond a break. If you ever read the books of Maya Angelou, she would always use Kingdom Come for expressing inexplicable happiness and satisfaction. Maybe, these two borrowed a leaf, even if unknowingly.

2017 was a massive year for Cameroonian singer – Locko. He made his debut on Coke Studio Africa – in Cameroon’s first inclusion on the show, collaborated with Tresor and Jason Derulo, among other acts. He won Best Male Artiste in Central Africa at AFRIMA awards. He also released some big hits with “Je Serai La” reigning supreme for its perfect fuse of R&B/soul, and the timbre of Locko’s voice. If we can start recognizing the future stars of Francophone music, Locko won’t miss out.

Like many songs love to praise the beauty of women, “Particula” follows the trend in a certified banger embodying all the styles of Major Lazer and each one of their collaborators—giving off a unified African sound. Can’t believe I met and worked with Major Lazer in the promotion of “Particula” music video, and Walshy Fire’s making of his “Finding Africa” documentary this year. Major Lazer is on a mission to know more African sounds, and with the penetration of “Particula” they are definitely one step closer. Co-produced by DJ Maphorisa and off their ‘No Better EP’, this song is by far Major Lazer’s biggest African tune by Africans in Africa.