So its Friday the 6th of Aug and at exactly midday my KBC producer calls me and says, “Hey young girl (as he calls me) i need you to go to Mombasa tomorrow morning to cover the beach party and be back on Sunday to record the show!”  That right there, was great to hear because am a traveller, i love different places, i love road trips and goddaymmit hadn’t been to Mombasa since i could remember, must have been almost 10 years! Yeah it had been that fuccccccccccking long! Before that i almost practically lived there with my sis, well till she moved to Nairobi nway… that’s another story, another day!

After spending Friday afternoon crazy battling with the BBC’s Topcat2 with  my girl Wanjeri in attendance, we finally leave the office at around 6pm for Nairobi’s downtown to book tickets for the morning bus! Unfortunately we couldn’t do this trip together as she had a must attend wedding for the next day but i sure convinced my cousin Miss JJT to accompany me 🙂 When we got to downtown, it was certainly hard to get them bourgeoisie buses as they were all fully booked till sat afternoon but we got lucky and got the last seats on the Sat 8.30 a.m Mash bus! Na katika pita pita zetu, some costarian man tried to convince us to take the LOL express, and i was like LOL Express, really? No thanx, here is the evidence 🙂 LOL, see? 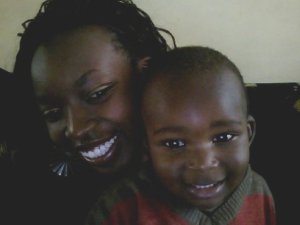 So when i got home, watched kiasi Greys Anatomy, then my 3 year old nephew Chaz helped me pack! I guess he tricked me into jacking my swag, he kept asking, “Hii ni nini?” “Hii ni ya nini?” For almost everything, packing turned out to be kindergarten class till he blackdout, but i love him! See that’s a picture of him and I a few months ago….

Saturday morning at 8 a.m we were in the bus, ready set to go! For the record, if you wanna drive-fly to Coast always take the Mash bus, believe it or not, we were at Mtito wa Ndei at 11a.m! That driver was literally racing against time, geez! I thank God the seat belts were tight and intact! We were in Mombasa just minutes shy to 2pm, 🙂 Yaaaay!

Now, you know you just got to Mombasa when all of a sudden you see palm trees, temperatures are humid and the sun is shining mild, not as harsh as Nairobi’s! First thing was check into the Coast bus office to book the Sunday 10 a.m bus back to Nairobi then next pittstop was Tamarind hotel.

I decided that we would first take a cab to the famous,”Mombasa Tusks”

so my cameraman would take some establishing shots of them, then we would head to the hotel. With the luggage and hunger, all i could think of was food, shower, food and food! We literally grabbed the first cab we saw! I asked the driver to take us to the Tusks then to Tamarind, then the went, ” Huko ni Summerlink basi, hapa hamna Tamarind!” We tried to explain to him that we were going to Tamarind, but he was insisting that it was Summerlink, I even had to call our hosts to confirm whether it was Tamarind or Summerlink (which made me look so silly) and turns out it was the latter, so i decided that he would only take us to the Tusks seeming like it’s the only place he knew well. I said, “Okay basi tupeleke kwa tusks za Mombasa ,” then he said okay hapo “Tusksss” ni sawa. My cameraman even went ahead to tell him, “pembe za Mombasa” and in no time we were heading there! Alas! But when the cab  stopped and the guy said, “Haya leta pesa mshafika,” we were at Tuskys SUPERMARKET!? That’s when we realized that he thought we meant Tuskys, but we actually meant “TUSKS” hahaha!! After a half scared hearty laugh as the cab guy wasn’t amused at all, we had to further explain to him that we were going to the Pembe za Mombasa! And he went on ranting, “Basi nyinyi watu wa Nairobi hamwongei vizuri, hatupatani” I thought he was going to hit me and Miss JJT, he was so mad i could see smoke coming from his ears LOL. But if we were going to Tuskys, wouldn’t we  have said supermarket then…?? SMDH but that was very funny! I later found out that Summerlink was an uptown street, haha labda tulikaa kama wasichana high class 🙂

After the cab guy literally dumped us at the tusks, baada ya shoot we took a TukTuk to Tamarind, Nyali. OOOHHHHH now that was a rocky ride 🙂 One evidently noticable thing in sharp contrast with Nairobi was THE MEN! Amen! Am telling you, all of them were eye candy-licious! Even the TukTuk driver across ours in the traffic! Ooh that was really great site seeing if you ask me! We paid 600 bob to Tamarind and later my Mombasa friends to be, said that we had been overcharged, ati we should have paid at most 250bob but nway it was worth the thrill!

I had never been to Tamarind… I think the best thing about it was definitely the view of the ocean from the rooms, check that out 🙂

I also met a couple of friends from Nairobi at the hotel, namely Philip Ogola and Stevens Muendo and oh gosh they are bad news when it comes to partying! (Lets leave it at that) The rooms were quite lovely as well, we showered and freshened up right before the scrumptious dinner! The weather was so pleasant and entertaining, I thanked God i had carried my shorts! Over dinner we met a couple of new acquaintances who we were later to spend the evening with at the party….

When the sun rises as early as it does in Mombasa, it would only make sense for events to start later than usual, if that makes any sense. Maybe the theory as to why when we got to the beach party mins past midnight, the main performers hadn’t started doing their thing. Juliani the first act got to the stage just mins past 1 a.m! It was after 4 a.m when the last performers, Necessary Noize got off the stage! Talk about ku-party hadi chee!

You would think that we would retire after such hard partying, not to forget how Juliani’s performance drains one of energy and the juuuuuuuuuuuuice but , NO! We were checking into Fullmoon club, Mombasa’s fresh baby! As we approached the club,  i couldn’t  hear any “boom twaff” as the custom in Nairobi! I thought to my drunk mind,”why would these folks bring us to a dead club?” My friend, kuingia ndani kumbe ilikua ni bonge la club! Check, the club is soundproof  (i.e the walls are padded like those of a studio) meaning the sound output is excellent, just had to expound on that for those who don’t comprehend! The club has 4 floors, yes FOUR, and all AC’d up! Carni has how many floors again? A letter to Nairobian clubs, having no ac is not an excuse ati because Msa is hot, temps in all clubs are hot! The couch in the club are made of the funky zebra print and 98% of the dudes up in the club were super HOT!!

In summary, the major difference between clubbing in Nairobi and in the state of the art Fullmoon club is: In Mombasa, no ordinary person would go to such an uptown club, well we didn’t see any funny looking person there, unlike in Nairobi where you would still find an Eastlands “orbb” in the highest of the VIP’s clubs! Then its only in Msa where people on the dance floor don’t actually bend over when “bend over” plays in the club, that was wierd! Eventually, we left the club at “i dont know” time maybe 5.30 a.m there! You know how after excessive indulgence, events that happen therein all become the nice misty blue and for some reason me and MissJJT ended up not sleeping at Tamarind but at Milele beach hotel which was equally amazing! I just remember them asking me to sign in at the reception. 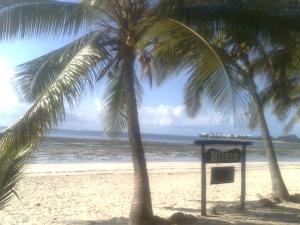 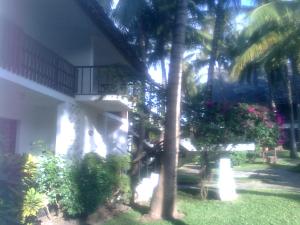 When we got to the room, i blackout (duh) funny thing i was up at 7a.m fresh BUT thirsty as hell and ready for breakfast! The first pixx in this post, i took it while at the breakfast table, that was the view outside! Here are some additional pixx i took that morning at the breakfast table! After that, we packed our shit, took a cab to Tamarind to get my cameraman! I still managed to do a standup (thats me tryna fight the wind! It was like a cyclone) by the amazing scenery of the Tamarind bridge (Grapevine is today in Mombasa nyef nyef nyef, that’s called a standup, tryna school you guys as well) Then we headed out and made it on time to town for the 10a.m bus! 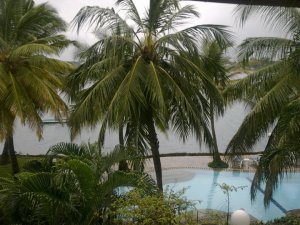 I know it sounded like a good 3 days, well it felt like it but in reality it was an amazing 30 hours give or take! There’s not much to write home about the journey back as it was all nostalgia, nostalgia and nostalgia 😦 This post is titled the mini-msa safari because i must re-do that in actual 3 days or more 🙂 All in all, it was great working & partying  hard in the beautiful town of Mombasa, not to mention i met and made friends with some very nice people! Special shoutout goes out to my girl Wanjeri for the help, MissJJT for the company and msa peeps, Hassan Faisal, Philip, Stevens, Erick, 22, Pharta and Rama! We must do it all over again!

BONUS! That’s me and blood MissJJT 🙂 love that girl, look at her!! 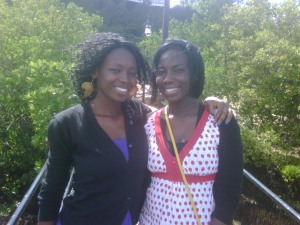 12 thoughts on “The Mombasa mini-safari”