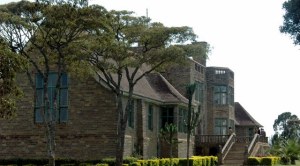 From Molo, it’s a scenic thirty minutes drive that my family and I enjoy. We arrive at ‘The place where the suitor missed the target’. Not my words but the tagline on the brochure I pick at the gate on my way into Lord Egerton’s Castle. I am wowed at my first sight of a castle; grandiose and whimsical. In a split second I imagine seeing a beautiful damsel in distress with flowing hair peeping from the medieval sight of the parapet—wishful thinking. This magnificent 53-room castle lies a few meters off the Nakuru- Eldoret highway (about fifteen kilometers from Nakuru town) and was built by Lord Maurice Egerton Tatton, the fourth and last Baron Egerton of Tatton  (1874 – 1958).

Robert Onyiego is a bubbly elderly man in his 80s. He was the Castle’s Manager and also the favorite of Egerton’s ten Luo servants. “Lord Egerton loved a Luo man’s work ethic, and we did not ask him any questions,” says Robert who two decades later has become the Castle’s caretaker and tour guide.

Lord Egerton was a smart man—an aviator and photographer/filmmaker who loved architecture. He was among the first white settlers to conquer the Kenyan white highlands, finally settling in Ngata farm. Here, he owned an extensive farm and prairies that stretched all the way from Rongai to Nakuru.  I can bet that any sane woman would fall for that package in the first quarter of the 20th century or today for that matter. But I am a little wrong.

There was and still remains a lot of mystery surrounding Lord Egerton. He was meticulous to the letter and possibly a tyrant but above all; lonely. Like most of us, he wanted nothing but love. Robert looks grim as he narrates perhaps the only true and modern East African fairy-cum-love tale. An Austrian woman came to Kenya from overseas to visit Egerton, her fiancée. At that time Egerton was living in a thatch-like six bed-roomed dwelling that echoed his love for African culture. To the lady, not only were his quarters unimpressive but they reflected on his entire bid to marry her. “I can’t live in a house the size of a plane!” She said. Marriage talks failed flat on Lord Egerton as the lady went back to London and soon got married to another man.

Egerton’s spirit was broken. Enough to build a wall inside his heart and a castle surrounding his existence. Contrary to popular theory that after being jilted by his lover, Egerton built the castle to re-impress her; he actually build the castle to appease only one thing—his solitude, confirms Robert. Among the things banned from the castle’s ward was live chicken and dogs because his former lover had compared his house to a chicken’s hut and a dogs kennel; Egerton’s Achilles heel was women. “He gave us orders never to mention even the word ‘female’ in his castle and its extensive 100 acre ward. Accompanying one to the castle was unfathomable.”

Thanks to Egerton’s absence, I walk freely up the flight of stairs leading into the castle. On the left of its ground floor is a dilapidated yet classic ball room that closely resembles the one from the Titanic, yup. Now empty and only home to a broken piano and architectural prowess, Robert shows us a corner near a large window where Egerton would sit under a golden curtain as orchestras and seasoned musicians from abroad played him symphonies. “He loved music so he invited artists from far and wide. This floor had coloured carpets with gold plating and the shelves by the windows all had clocks and cutlery made of gold,” reminisces Robert.

The walk through the 4-storey castle feels like a time travel into chivalry. The man had mastered his delectable traits, I can tell by the large wine cellar situated in the basement. The castle has many bathrooms with defunct electrical machines that would be used to warm towels and dry hair, with at least four to himself. The rest were for male kids, guests and the ladies (despite the irony that no woman took a shower in there during his tenure). There’s a large safe and two food stores: one was for imported foods and the other for local products. “The kitchen had a mini slaughter-house. The chef would have to shower and perfume himself before cooking Lord a meal. A doctor would drive from Nakuru twice a day to come inspect his food,” states Robert. It also surprises me that all the rooms are numbered. Lord Egerton’s bedroom door number is 20 and locked. “It still has some of his personal effects, ” he explains, adding, “All 53 rooms were numbered because we had a lot of businesses running around here, it was easier that way to avoid getting lost.”

The love story goes on as narrated by Robert. Together with Egerton’s close links they tried to find him another woman so that one day she would inherit his vast property (realistic but sad if you ask me). They found him a Black American woman. Still wary of his feelings Egerton went into a thorough background check on her and found that she had been married with kids in Australia. Poor Egerton, his last hope shattered.

It’s the castle where Lord Egerton lived in loneliness or found fortress (heck- who really knows?) with his servants till 1958 when he succumbed to what Robert described as lung complications. This was after having flown 25 doctors into the country to fix him. It’s sad that they couldn’t even save his life. He was buried in Nakuru. All his gold and movable wealth was sent to his family in London. His last surviving sibling died the same year as him.

The luxurious castle was built between 1930 and 1940. “It’s stones and zinc tiles were shipped in from Europe and Asia by 100 Red Indian builders from America,” says Robert.

Lord Egerton’s castle is now just two decades shy of a century in age and a tourist attraction of international repute and currently under the stewardship of the Egerton University (which Lord Egerton himself also established).

I am curious if Lord would turn in his grave if he knew that women were today visiting his castle; some even getting married on its picturesque lawn. “I haven’t thought much about that as Lord is long gone,” says Robert who’s today wearing a ragged trench coat and a hideous hat. “I miss Lord Egerton’s lifestyle. He bought us many gifts; I remember he got me a motor bike, three suits and ties,” he concludes pensively.

27 thoughts on “A Mystery into Lord Egerton’s Castle”