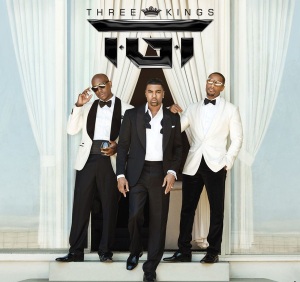 Christmas has come early for lovers of that real old school R&B music – and well – the sight and sounds of a sexy black man (in this case three of such). The gift is two interludes and 17 tracks making the album Three kings by R&B super group TGT (Tyrese, Ginuwine and Tank). Formed in 2007, this is one of the greatest R&B music groups, which never took off, till now. The trio’s show of audacity has been received with open arms and the album even topped Billboard R&B/Hip-Hop chart upon release (20th Aug 2013).

It’s already established that Tyrese, Ginuwine and Tank are top-notch vocalists and major influences of the baby-making music era; making their debut joint-album, an ode to lost R&B music and the now-defunct music groups of the 90s. Look out for the album’s must-listens like “Tearing it Down”; the very naughty “Hurry”; the Ginuwine stamped “Weekend Love” and the slow, good for bedroom love songs: “Lessons in Love” and “FYH (Fuck You Happy)”—this is Adult music.

TGT’s musical blend is like a perfectly mixed cocktail. Not too sweet or dry, but just enough. Loved the entire album from start to finish, didn’t even need a forward button. The merger of kings of R&B makes for a gymnasium of sorts; with each member stretching their vocal limits leaving behind a trail of replayable (Yeah – I just created that word) ad-libs over the trio’s impeccable harmonies and vocal arrangement and song writing. Most songs in Three Kings, just like the 90s R&B songs, are about making babies, relationships either gone sour or to flattering extremes. The album’s only collaborators are rappers, Black Ty and Problem in song no. 1 – “Take it Wrong” and song no. 2 – “No Fun”, respectively. Perfect entrées with perfect rap verses. Both encompass that feel-good R&B sound with a kick and bounce and lyrics to drive you straight to bed frolicking or simply swaying to the beat.

It’s this legit baby-making jam that TGT released as the first single of the album. Singing about sex, while using the word ‘sex’ is a thing of the 90s, and when you can do it in this era and make it sound so good and for lack of a better description, sexy – then you know you still got it. Ladies, you could get pregnant just by the replay of this song! Be very wary.

Here’s the genius of storytelling in a song, and a dedication to all the ladies and gentlemen heartbroken, after failed relationships. This ballad is probably the essence of grown Tyrese, Ginuwine and Tank (representative of a grown mature man)- It takes time for a man to grow … I know it aint never worth your heart, tears and scars … The song is a man’s realization that he needs back the woman he lost. The lesson to learn here is that; if it hurts, leave; and if the ones who hurt us own up and change, let’s give them a second chance.

– Tell me how the hell I hurt this woman again? I will just give her time, so she may reconsider – Ginuwine sets the pace in a song with the album’s most enticing hook. A man is at the verge of losing his woman. Because there seems to be nothing that can be done, he promises to be ready next time around, and prepares to buy her a ring and a house. But it’s Tank’s verse that is a killer – a real man admits when he’s wrong, admits when he loves, picks up the phone and says, ‘please come back home’– If God still manufactures these kind of men, send them over. Thank you.

After “No Fun”, this is my favourite off Three Kings. What a great production with a beat similar to Usher’s “Climax”. Yet another perfectly crafted sex song with lyrics and falsettos to make you want to hit replay – Look at us about to kaboom in this room like it’s Independence Day – goes Tyrese. Tank is killing it in the song’s hook. If this song was released together with “Climax”, I guarantee you; Usher would be having a hard time keeping on top of the charts.

– Who turned on the lights? You- shining through, even through this dark room – Ginuwine kicks off the temperature of the song, a serenade to a missus. Ladies, even when times seem so rough or dark, you should know that your light can never burn out. The bridge goes – what I see is brighter than a flame; no star could shine quite the same – power to the men who appreciate their women.

Coming to think about it, this is greatest R&B album I’ve heard, yet. Mainly because, back in the day, never got a chance to sample most albums because, you didn’t really have to; as nearly all songs in those albums were playing on radio. And to be this good and soulful and good-spirited at an era of rationed R&B, how couldn’t it be the best, so far? The production is beyond mind-blowing. Most of the other songs like for instance “Our House” would use a rap at the bridge, from a new school kid like Kendrick but nope – TGT was probably making a point, using pure R&B music to remind us of the days of producing soothing music loyal to exalting women; music that made it okay for men to have feelings. There was a time when we sang to this. Huge thumbs up to the reigning three kings of R&B. This one is for listening to anytime, anywhere.