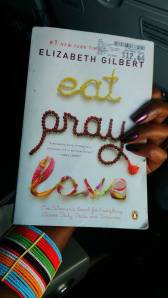 Never, at any point of my life, have I ever read a book whose breath and pulse mirrored my own like Eat, Pray, Love—a brutally honest and raw tale about “one woman’s search for everything across Italy, India and Indonesia.” It was delightful for the 2006 memoir to have been my companion during a recent trip to Netherlands across Kenya and Turkey.

American author and journalist Elizabeth Gilbert is an ambitious career woman who can’t seem to get her marriage together. So she files for divorce and quickly moves on with a different lover. However, none of her relationships work out. And nothing makes things work – not prescribed drugs, countless nights of crying on her bathroom’s floor or even yoga-for-starters. Sparked by an ambitious plan and an old medicine man’s forecast that she would one day return to Indonesia (where she had visited years back while on an assignment); Elizabeth decides to embark on a 12-month trip across continents, on a journey to scrutinise her inner self – to find the self and discover soul food.

She begins her journey in Italy, the home of world’s best pizzas and pasta makers. A friend, Giulio tells her that Rome’s word is SEX. While trying to find her life’s own “word”, here she submerges herself into the pleasure of food like “airy clouds of ricotta sprinkled with pistachio, bread chunks floating in aromatic oils, tiny plates of sliced meats and olives, a salad of chilled oranges tossed in a dressing of raw onion and parsley.” It’s the first time she encounters the expression: Il bel far niente “the beauty of doing nothing” while learning Italian. While in Sicily, the most third-world section of Italy, she remembers what Goethe said: “Without seeing Sicily one cannot get a clear idea of what Italy is.” This part of the book makes me recall meeting a new friend, Lucia, in Hague. Lucia who hails from Sicily turned out to be the sweetest Italian girl I’ve ever met.

In India, Elizabeth discovers the power of meditation, yoga and silence. After having tasted part of her heart’s desires like forgiving herself and forgiving others, she heads over to Indonesia with an open mind, hoping to find more balance. Here, she ends up buying a Balinese woman a house and finding love, after all. What an intelligently authored book with impressive research on travel and different cultures. In Indonesia, she discovers that the word amok, as in “running amok,” is a Balinese word, describing a battle technique of suddenly going insanely wild against one’s enemies in suicidal and bloody hand-to-hand combat.

The book isn’t as cliché as the sound of its title, or as simple and straightforward as the 2010 film adaptation might have depicted the story. But the ending is. Elizabeth ends up falling in love with an older Brazilian man. But before then, she writes, “I not only have to become my own husband, but I need to be my own father, too.” I really loved that Elizabeth is jaunty and not afraid to share any bit of her personality. She writes like it’s her private diary. From TMI that, sometimes, ends up annoying the reader like mindless chatter would, to the juicy part where she recounts breaking her celibacy – “never have I been so unpeeled, revealed, unfurled and hurled through the event of love-making” – and the dry spell days that drive her to masturbation.

Elizabeth digging into her inner being to identify her weaknesses and how best to overcome them, is my first encounter with the book’s power. Most times, human beings don’t want to be corrected or when corrected – they find it hard accepting their faults. But it is surely something of magnificent power to sit down and analyze your life problems and triumphs; and from that – prescribe yourself a winning life-changing plan. This book has even inspired plans for my next euro-trip 🙂

BONUS: She ends up marrying that Brazilian man after the book. They’ve since been together for more than five years. You can also check out my review of another wonderful book Captain Corelli’s Mandolin- Louis de Berniéres Then watch the below video of Elizabeth talking about the film adaptation of Eat, Pray, Love. She’s so funny.