It’s sooooo good to see D’Angelo in concert, I don’t think words or reviews have accurately described an experience with the American singer/songwriter and producer – but I will try. 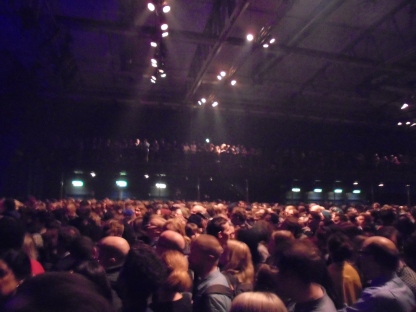 On a very cold winter night, I am with my Europe partner in crime—Sylvia at Stockholm’s Annexet concert arena. Excited to catch D’Angelo’s ‘Second Coming Tour’, we are both expecting so much and curious to see if tonight will be as magical as we imagine it will be. Standing here now surrounded by thousands of people, I can’t help but glow in the realization that the little girl from Molo made it here.

I can’t wait to hear his set list. Hope my Black Messiah favourite Betray my Heart and my all time favourite Untitled make it.

It’s about 9:00 p.m. Some really dope old school neo soul mix takes over but the crowd is stiff and staring hard at the dark-lit stage. After a while, the music stops and all lighting on stage goes pitch dark. Amidst the crowd’s cheers and screams, the official concert kicks off with the sermon-esque intro of 1000 Deaths, which quickly transitions into Prayer in a brilliant mash-up. 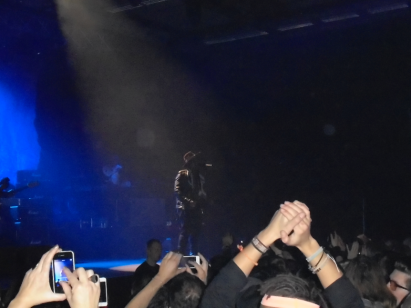 We can see only D’angelo on stage, after which full bright blue spotlights overlapping each other in the smoky dark blue stage ambiance stun our expecation. This is the introduction of D’Angelo & The Vanguard – his 9-man band. Their only lady – Kendra Foster – stands out with her angelic dance moves. I can tell that she’s a a free spirit.

After Prayer, the band revisits 1000 Deaths. It’s heavy electric and bass guitar clashing in deafening sound officially denounces the idea of this being a neo soul concert – we are rocking! For the first time, D’Angelo picks his black and silver embellished bass guitar and flaunts his newly acquired skill since taking a sabbatical.

Notable are the transitions between songs – such perfect mash-ups. Like how 1000 Deaths guitar chords transform into Aint’ That Easy. Also, D’Angelo’s careful balance between falsettos and sharp growls is so Prince – he’s clearly morphed into his mentor.

From time to time, in between songs – the arena bursts into constant applause. And like a Messiah of sorts, sometimes D’Angelo stops to raises both his arms, so wide – as if reaching out to each and every one of us. It’s a reception only worthy of a King or some god and D’Angelo takes it in like one. Sometimes he taunts the crowd,“ Stockholm, are you done yet?”

For the blues and neo soul set, D’Angelo shows up in a red and black poncho to first perform Really Love. A red spotlight shines on Kendra Foster, who opens with the song’s Spanish (I suppose) prelude. The band eases out in this smooth session allowing us to finally hear the gymnastics of D’Angelo’s crisp voice and smooth growls.

The vocal arrangement of Brown Sugah live is really dope, probably the best at the concert – even D’Angelo tries to get us to sing along. The instrumentals have a groovy bass guitar giving the song the funky twist it would have if it were to feature in Black Messiah.

Sugah Daddy live is pretty cool and has a faster tempo. I keenly hear the lyrics of Till It’s Gone (Tutu) here for the first time – such beauty! Written by D’Angelo and Kendra Foster (who I am going to meet in Part IV of this tale). Below is part of the lyrics …

In a world where we all circle the fiery sun

With a need for love

What have we become?

Tragedy flows unbound and there’s no place to run

Questions that call to us, we all reflect upon:

Questions that call to us, we all reflect upon

Charade is one of the last and most electric performances as D’Angelo and The Vanguard break into some crazy freestyle and dance – now we’re in church. Wow this is awesome!

The last performance is D’Angelo’s much-talked about Untitled (How Does it Feel?). Of course he doesn’t remove his clothes. This is now – that was then and since, D’Angelo has added a few extra pounds. However, sex is still dripping off him – trust me.

Met D'Angelo today. He is the black messiah. He's a god. OK. Let me first talk about the Second Coming Tour & #Stockholm concert – it was so good, not one word or description can come close. I felt so much love towards him from Swedish people, he must have too. He got so emotional during final song #Untitled #HowDoesitFeel he missed first lines … Thank you @cleopatramukula , nice to meet the other Cleo, @mzkendrafoster, Alan & entire D'Angelo management / Vanguard – guys THANKS! #Bless #DANGELOSTHLM was errrrrrrthing! #StockholmNights #Sweden #DAngelo #SecondComing My stories coming soon….

How D’Angelo Funxed with our Psychology

When the concert started, like most artists D’angelo doesn’t introduce the band. Somewhere half way, he introduces his band members one by one with such pride, lastly asking – “What’s my band’s name?” Because most artists do band intros at the end of the concert, I am a little sad, ‘Oh no – the concert is about to end” But its okay because I feel like its been so great so far. But there are other sets coming, yippee! The realization of there being another set makes you feel brand new and so lucky.

At the very end of Untitled, the band vocalists only sing “How Does it feel?” over and over again. It does feel like the best gig I’ve been to all my life.

One by one, the band members start to leave their instruments, either  by setting them down or walking off stage carrying them after bidding D’Angelo goodbye and thanking him – I guess for the opportunity or a great time. It’s an emotional goodbye between D’Anglelo and his band members, till only Kendra is left singing “How Does it feel?”

When she leaves, all of the lights are suddenly off, like in the very beginning, except for the spotlight on D’Angelo – who is now all alone playing the piano and singing “How Does it feel?”

He goes on and on and finally bids us goodbye. Nobody objects. It’s been so great.

I know it’s time to go meet D’Angelo in person. Wonder if it’s really going to happen because I am not leaving here without doing my best.

Will keep posting you guys short clips from D'Angelo #Stockholm show last night till I feel like it's enough 🙂 So. He kept on getting standing ovation from the crowd almost at every song. Lol 😂 The transitions between songs was seemless pls note @cedo_producer @sautisol @fancy_fingers #DANGELOSTHLM #SecondComingTour

Look out for the last part of my tales about D’Angelo: How I Met D’Angelo Part IV, coming soon …

How I Met D’Angelo Part I

How I Met D’Angelo Part II

How I Met D’Angelo: Part III

Inside Second Coming Tour: How I Met D’Angelo: Part IV