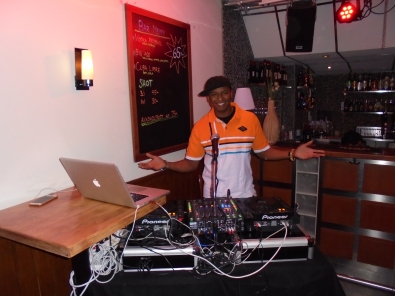 There are plenty of activities: some chitchat, dance, laughter and hugs in the crowd as Kenyans in Sweden reunite and make new alliances. Kenyan DJ Frank, formerly of Mamba Village and now based in Sweden, plays a good mix of African songs. They range from rhumba songs from greats like Papa Wemba and Wenge Musica; popular Kenyan hits from olden artists like Remmy Ongala and Maroon Commandos to the best of the new crop of hit-makers like Madtraxx, Jaguar and Sauti Sol. Over at the bar, Turkish attendants bop their heads to the music while looking over to the Kenyans on the dance floor showing off famed Kenyan dances like Mosquito, Helicopter and Lipala Dance.

Kenyan businessman and music promoter Clay Onyango is behind the launch of Club Mombasa. Inspired by a need to create a space for Kenyans to connect without prejudice, he says, “Kenyans are indirectly discriminated elsewhere. ‘All tables are booked or you’re not dressed appropriately’ – some of the things we are sometimes told when out just to have a great night.”

Clay has lived in Sweden with his family since 1991, and since successfully set up a trusted Moving Company: Orkarinte. His office is just a block away from Dagobert Restaurant, where a brilliant idea struck him during one of his many lunch visits. He would eventually seal a deal with its managers to transform the restaurant into a Kenyan club every night, “with Friday nights mainly focusing on Kenyan music.” Beaming at the success of Club Mombasa launch, Clay says, “I am so happy, word went round and even attracted other Africans who aren’t from Kenya. I didn’t even know the Ambassador Sang would come as I didn’t invite him.”

Unlike in some European cities, there aren’t other known Kenyan clubs or restaurants in Stockholm. For a Kenyan visiting Sweden like me, it’s refreshing to have a Kenyan experience away from home. But for Kenyans living in Sweden, this is a dream come true. Osore Ondusye is a retired Maths and English Kenyan teacher, married to a Finnish woman and has been living in Stockholm for 30 years.

This is an event he couldn’t dare miss even though he identifies himself as “one of the oldest Kenyans in Sweden”. The 65-year-old says, “Before tonight, Kenyans in Sweden hardly met up at specific places. That the Turks agreed for Clay to use their restaurant for Kenyans is not common. Kenyans mostly know of get-togethers via a website: Kenya Stockholm Blog, established about 20 years ago. Some social gatherings and very few occasions like visiting dignitaries have brought Kenyans together.”

At Club Mombasa, I ask ambassador Dr. Joseph K. Sang a few questions about his presence at the launch but he says he’d rather respond during working hours at the embassy. It’s clear that he’s out here in a different capacity – as an ordinary Kenyan enjoying a night out. On Monday morning, I catch up with the ambassador at his spacious office at the Embassy of Kenya in Stockholm along Birger Jarlsgatan. He’s now dressed in a suit – a stark difference from the casual man I met at the club. He says, “The launch of Club Mombasa has left me very happy and glad; I would like to see more of that. Plus Kenyan music is fantastic! We encourage diasporans to set up Kenyan clubs and restaurants, and more businesses to spark trade.”

This June the annual Swahili Culture event in Stockholm – working towards bringing Kenyans together while promoting an East African culture in Sweden makes a return. The Embassy of Kenya in Sweden has collaborated with the embassies of DRC, Tanzania, Congo and Rwanda to curate Swahili Culture. Dr. Sang says, “It’s not just about promoting food, music, film, art and fashion but also celebrating Swahili. We encourage Kenyans here to speak, and teach their children Swahili.”

A shorter version of this story was published by Kenya’s Saturday Nation April 4th. Read: Kenyan club opens in Stockholm

BONUS: For more of my tales from Sweden check the series below:

How I Met D’Angelo: Part I

How I Met D’Angelo: Part II