The Danfo (bright yellow public transport vehicles in Nigeria) really isn’t for weak asses, and not for mine – especially at this point of my life because I just started doing butt squats. The Danfo we catch from Lagos Island back to the Mainland on a Monday evening is pretty decent – it has working lights, and the benches are padded with soft leather. However, it’s not soft enough. My butt really suffers from the discomfort of sitting on a bench. I can’t even start to imagine how it would feel if we rode in the Danfos with wooden benches.

At first, I am very keen to get into a Danfo to get a dose of Lagos. I also want to compare and contrast the experience to Nairobi’s matatus. My Lagos friends don’t warm up to the idea of taking a Danfo but thankfully I convince my girlfriend and host Abi. Before heading out to the island earlier, her mother gives us one look and says, “Don’t take a Danfo in your neat dresses while you’re going to town – maybe when you return. Call a taxi.” On returning we grab one in the CBD. The conductors are yelling out to passengers, just like in Nairobi.

I find just as much drama and a nuisance typical of a Nairobi matatu in a Lagos Danfo. 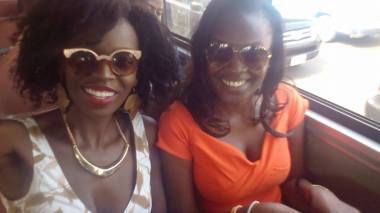 There are four rows of seats with each accommodating five passengers. Two seat at the front. Thankfully this Danfo isn’t overloaded. As soon as we depart for the Mainland, a passenger sitting a row behind us transforms into a preacher. It’s baffling how the same bus-preaching I absolutely detest and run away from in Nairobi would haunt me all the way from Kenya and catch me in the first Danfo I’d take in Nigeria. Seriously – if I want to hear a sermon, I will either go to church or read the Bible.

The trip costs 200 Nairas per person. And just like most Kenyan conductors, this Lagos conductor lets the Danfo leave yet he has no float for customers’ change. Within no time all passengers are descending on him. It’s a little too much to handle in the midst of pastor’s words; he’s literally flowing like El Nino rains. Usually everyone in a Nairobi mat will go crazy over a conductor openly refusing to give change but Lagos passengers won’t let this conductor breath even though he hasn’t refused to give back change. “I don’t have change now! Wait – ooo!” All he can say.

First bus ride in Lagos! Trying to convince @timahipaye to let us #Danfo when we return. Toughie! 😂 Free day before I start work tomorrow. #TravelTales

The preacher in the bus won’t stop. He is preaching notions from a Bible I have never heard of. “If your wife is an infidel – never leave her to marry another woman. That’s a sin … Women must never wear trosiiiiss (trousers) – never! And about make up – listen and listen well women. You’re making up yourself for who? You have four colours on your face and when you look at the mirror, you cannot recognise God. If you’re not a prostitute, leave make up now!” I am so offended by his foul mouth and cheap gospel. To make matters worse, he starts to sing. It’s such atrocity. After the singing, Abi and I are anticipating his plea for money or blessings, whatever they call that tip. But at a random stage this dude abruptly jumps out of the Danfo and flees without paying his fare. Please – this is Nigeria. The conductor stops the Danfo and runs after him. I am the only one shocked that a preacher tried to get away without paying. Abi says, “He probably didn’t pay because he was busy preaching when the conductor was collecting the money.” 🙂

Somewhere along the slow-moving traffic I spot Bien on the biggest billboard along The Third Mainland Bridge. The opposite side still has Yemi Alade and Jua Cali’s Coke Studio Africa mash up—I saw this one during my last trip to Lagos.

You might also dig my series – To Nigeria and Back: Baptism By Fire – from my Travel Tales.

By the time we are alighting the Danfo, my butt is aching from the bench. My ear is aching from the preacher’s echoing voice. My tummy is rumbling from the water we bought along the street. My eyes are burning from traffic fumes. My wish to ride in a Danfo has been accomplished and I don’t think I am doing it again.

5 thoughts on “Back to Nigeria: Riding in a Lagos Danfo”