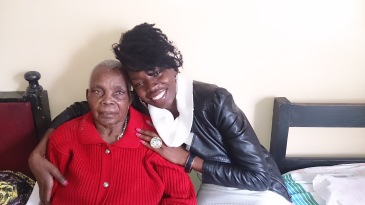 My paternal grandmother, Dani Emma Awuor Owoko, was a simple woman. It gave me so much gratification that her funeral was as simple as the life she led. She had a big boma and many acres of land, but spent the last thirty years living in the small three-roomed house her son (my father) built her. Dani Emma had all the characteristics of Big Momma. When I was younger, I would get lost in her close embraces and suffocate in her scent of Dettol or Rob. I would be amazed by her whitish grey short hair (every time she took off the white or blue kitambaa on her head) and smooth light skin.

Dani’s flair for storytelling and unique voice stood out. Most of her stories were of journeys she had undertaken in the past, extraordinary people she had met, or made like my Dad, and dreams (some of which were premonitions or sort of apparitions). Her voice was alluring yet commanding. At certain intervals, it would be deep yet high-pitched. The sound of her speech was almost as if the kind that would be produced if a person with a stereo for a stomach swallowed a microphone. “Choke!” was one of her favourite exclamations. “Yao rangach!” was one of her favourite things to shout. Opening the gate for her visitor’s cars was dirty work she never liked. So she would shout at anyone on sight to open her own gate.

Fun Fact: I was named after Dana’s mother, Anyiko.

In her final months, Dani lost her speech. Quite the epitome of life’s ironic twists for any storyteller. But through eye contact, touch and smiles, for months, we managed to communicate. During this time, I only saw her a couple of times and only heard her speak once calling me, ‘Mama na’ (my mother) when I introduced myself as Anyiko.

I remember when I was younger (below 10); Dad and granny were still alive. We would always leave home (Molo) so early in the morning for dala (Ugenya) to arrive at dusk after a Kericho tea-stop and Kisumu fish-stop. It was such a long and tiresome journey but I always felt like the destination was a special place. I loved the plants around Dani’s homestead and the smell of herbal trees around it. At night, there was the roaring sound of Dad’s hearty laughter around the boma. In the pitch darkness of Ugenya skies, I recall savouring every moment of the magic that was shooting stars and dancing fireflies.

Another Fun Fact: I once left my beloved cat at Dani’s during one of our trips and later got word from her that the cat had fell into her pit latrine. That shit broke my heart. Why I hate cats.

In her heyday, Dani and her husband, Miyayi Owoko, made such a stylish couple. I heard somewhere that before finding salvation, Dani was a badass traditional beer brewer. But all my life, I knew her to be a unwavering Catholic (Katolik – she called it) and servant of Christ, as she would have loved to be introduced.

Arrivals and departures at her home were strictly officiated by rosary prayer and the sprinkling of Pii Hawi (holy water). Her casual prayers were nearly as long as the length of a full Catholic mass. In fact, when younger falling asleep in the middle wasn’t such a strange thing.

Returning to dala a week ago for granny’s funeral was an emotional roller coaster. More than the sadness that comes with having to say goodbye, it was a reminder of the few but special moments I shared with my late Dad during earlier dala trips and the long-gone simple childhood days. Like a child’s umbilical cord is cut off their mother, is granny’s departure. It’s left me feeling detached from whatever little I was grasping at in the already hollow cleft left by Dad’s demise.

As we lay Dani to rest next to my Dad’s resting place – one glance at my mum and like looking into a mirror, I see her pained more by the reminder of the day she had to bury her beloved husband, right here.

All her life, even in dementia, Dani talked endlessly about my Dad, the beloved son she lost. I was only eight years old at my Dad’s funeral but I remember clearly that I couldn’t figure out why it was my grandmother who cried and cried and cried, as if she was the one who had lost her husband, and not my mother. If this departure by any chance brings Dani closer to Dad—those two are going to have a serious reunion party.

While en route to dala for the funeral, I am chatting with my sister in the States. She is named after granny, Emma Awuor Owoko. “I am so sad because after this, there won’t be anything left in dala,” I confess. Emma says, “I am so sorry, but you are wrong, the great memories we shared will always be there. Dad is there and Dana is still there, just not in body but in spirit.”

True to her word, Dana is felt yet missed all through the trip. Plus I only spot fireflies once, on the night after her burial 🙂

BONUS: Wrote the below poem for Dani Emma on her farewell day.

Today, for the first time, we are in dala, without you.

But instead of tripping, we see you at every glimpse of your homestead.

With every memory we recall, we see you grandmother – smiling and narrating your enchanting stories (some of which you repeated without knowing).

With every corner we turn, we feel your warmth.

With every prayer we mutter, we hear your strong voice, silently whispering among us.

With every soil and flower we rest at your place of sleep, we feel at home.

Now, you’re back home where you longed and next to your beloved son, on your right.