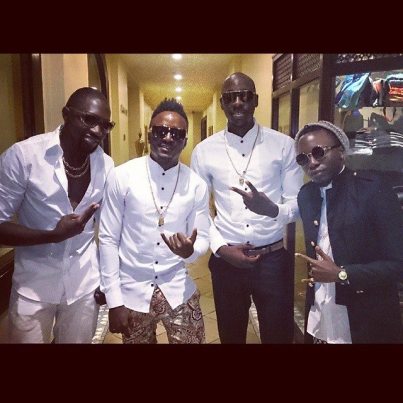 In the 48 hours I spend in Tanzania (TZ), I never hear TZ radio playing a single Nigerian song or American hit single. My ears don’t suffer like they do in Kenya. In fact, I never even hear them play songs from East Africa but only their own, even though a lot of TZ people tell us that Sauti Sol songs: Soma Kijana and Shukuru are fan favourites. Once, I hear Sura Yako off a radio Saturday Mix.

The Kenyan music industry is still tied to the constant debate, about whether artists are producing shit songs or it’s the DJs who are not playing local content but instead forcing into our ears too much of foreign content. Because I am journalist and a strong believer in local content and creativity, I always put myself and my peers in the first position to take blame. Kenyan media hasn’t yet achieved what other successful and self-sustaining music industries have done for their own artists. In this instance what TZ media has done for Bongo artists.

On a fine Saturday afternoon, it’s so hot in Tanzania (TZ) and the traffic is maybe worse than Nairobi’s. But the venue where Sauti Sol is performing tonight, Escape 1 Mikocheni, just by the beach is so fly; we can’t wait for the show. After visiting TZ radio stations, we’re here for sound check. Before show time, at about midnight, I present the organisers with Sauti Sol’s hospitality rider. The organisers actually ask me if there is anything else the band needs. This is unlike many Nairobian promoters or event organisers who after paying artist performance fees, they care less about artist’s entertainment prior and after the show.

When we arrive at the event’s venue, the gentle nature of TZ people really shines. Nearly all mainstream photographers are generally obnoxious. They will click into messing the sound of your recorded interview and even get into your shot or trample you over at a press conference just to get a perfect shot. Well, that’s really like the softer version of real paparazzi but when Sauti Sol arrive at the backstage, several photographers and event promoters come up to them; stand at the side to ask me and the event’s organiser, Amarido, for permission to take photos with them or greet them. Like, what?

Outside I see a lot of people sitting patiently waiting for the band. And when they finally get on stage, the audience maintains it’s cool, while still not so up tight not to dance. It’s a really mature and cool TZ crowd and Sauti Sol really enjoy this. After the show, instead of being crowded by groupies, we meet a couple of radio producers and presenters backstage. It is a general Kenyan attitude that if you are not one of the biggest acts in the entertainment industry, every single person will act like they don’t know you, even when they do. Did the 8-4-4 system subconsciously teach Kenyans that art is shit? I am not that kind of journalist or person who will act like I don’t know you, when and if I do. I take pleasure in introducing myself to people and using the power I have through my journalistic voice to expose talent. But most Kenyans seem not to want to acknowledge talent or even some established artists. That’s why it’s very simple for many to shamelessly parade that fallacy that a majority of Kenyan musicians produce shit music, instead of taking time to give an ear to underrated artists with great albums like Jemedari, Chizi and Atemi.

Maybe, it’s true that a prophet is honoured everywhere except in his own hometown. According to my quick survey about TZ’s music industry, I discover popular opinion has it that Ali Kiba still is the biggest act in TZ and not Diamond (though still beloved) as it seems from outside TZ. Few TZ artists have crossed over to Kenya’s music industry. Even fewer Kenyan acts have done the same in Bongo. However, what Bongo has done for their artists is what should be emulated in Kenya. It doesn’t matter that you’re not Diamond or Ali Kiba, you get airplay and to perform at Serengeti Fiesta (TZ’s biggest show bringing together different artists, big or small, from around the country), that recently ended in such grandeur by having T.I as the main act.

Streets of #Daresalaam yesterday afternoon! Glad to be back in Nairobi now. #TravelTales blog post coming up via www.anyiko.wordpress.com

Bongo music rocks because they have found a way of supporting their local acts and even when most of them don’t cross over to other regions, they are accepted and get airplay at home. This has in turn, made artists localise their stuff to appeal most to local consumers. Authenticity in this industry is key. TZ promoters and organisers are trustworthy and know how to treat artists. Kenyan artists shouldn’t have to beg Kenyan media and DJs to play their songs; it should be the media’s duty to support local. Support will be directly proportional to better quality of productions; and the same way, other factors in the industry will only get better.

On landing back to Kenya, I quickly think about my observations and recall the constant arguments and battles I keep having online with Kenyans, trying to explain to them why they should support Kenyan music and why it should be their responsibility. “Why the hell wasn’t I just born in TZ and found myself working in the TZ music industry?” I wonder, but because I wasn’t, it’s my duty to make this better. A luta continua!

During my short trip in TZ, I am so tempted to jump into a ferry for Zanzibar, I have even prepared the fare and all but I save it for another time. I will have to do it when I have ample time.

Read the first part of this blog post here: To Tanzania and Back: Bongo Love (Part I)

BONUS: Read one of my articles on music entertainment published by Daily Nation on Why Kenyan music misses the cut.

3 thoughts on “To Tanzania and Back: Why Bongo Music Rocks (Part II)”