Journalists are like vultures to leftovers when around story opportunities. In a few days, I am headed to Sweden to attend D’Angelo’s Stockholm concert (part of the Second Coming Tour in Europe). And even though I haven’t got his contact, I

am planning to meet and interview the Grammy Award-winning neo soul/R&B singer while there.

I have tried to get through to D’Angelo’s management via several emails, Facebook and tweets but no response. It’s a little frustrating but I won’t relent – I know that either way I will file a feature or two on his triumphant return.

Growing up, my mother never allowed us to get out of the house, unless you were going to school, church or shop. We worked around what we had – which was only finding the world through films and music. My sisters, especially Emma, always had great taste in music—introducing me to grown music at an early age. Even before my teens, my definition of music was synonymous to Tupac, Michael Jackson, Lenny Kravitz, Maxwell and D’Angelo. The rest didn’t matter much.

The thought of meeting D’Angelo then or now is still so foreign to me, a girl born and raised in a small town (Molo). But with my wealth of contacts (perks of being a Publicist) in an increasingly shrinking internet-world, I am doing my best to make it happen. I start to stalk all my European contacts for the hook up and thankfully my girl from Paris, Cleo, puts me in direct contact with The Vanguard’s keyboardist Cleo “Pookie” and D’Angelo’s management 🙂

The rest is history.

From the day I arrive in Stockholm, I am almost never chilled out because I can’t wait for D’Angelo’s concert day to meet his people. Is it really going to work? Anxious, I send his tour manager several emails alerting him that I am already in Stockholm and would like to get full details leading up to the Feb 28th concert. But they are quite taken by the Second Coming Tour. I am surprised to get a response. One email says, “You will find your tickets and backstage passes at Stockholm’s Annexet concert venue at 7:30 p.m. on day of concert,” assuring me, “It won’t be complicated.”

I know how hard it is to get through to D’Angelo. As I move closer to his concert day, the more the idea of meeting or interviewing him sounds crazier. But I do have a strong feeling that it might happen. To avoid any jinx, I keep it all under wraps. Only his management, my editors at Nation Newspaper and a few friends know what I am up to. 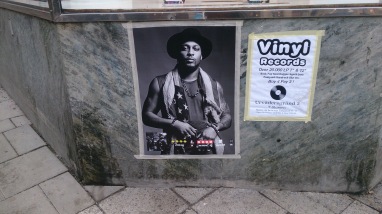 On the day of the concert, I am with Sylvia in town for some shopping and museum rounds. I spot D’Angelo concert posters everywhere. Today I feel all grown up because amidst the addictive pleasures of travel, I have brought myself this far to work and play.

Whether or not I meet D’Angelo, I am chasing a couple of Kenyan stories in Sweden and will still file a review of The Second Coming Tour concert. And for the cherry on top – I am reuniting with my friend Sylvia at her home in Sweden. Last November we bid each other adieu in Paris, jesting, “Who knows where we’re going to meet each other next …”

Seeing D’Angelo in concert is something I would always want to do at any point in my life. I just never thought I’d ever meet him, especially this way.

In the continuation, check out:

How I Met D’Angelo Part II

How I Met D’Angelo: Part III

Inside Second Coming Tour: How I Met D’Angelo: Part IV

Happiest of birthdays to you @pepperland06 Forget what anyone tells you my sweetheart - I am the one who loves from here to the end of the world! ❤️
On Twitter right now, following @kizazichetu Please do the same and join us as we discuss matters cervical health today! Kizazi’s second tweet chat hosted by @njokingumi is on early detection and treatment of cervical cancer and featuring panelists: @ebbyweyime @betty.adera & Sophie Hodder.
This picture taken at the Maasai Mara Botanical Garden represents my happiness in simple things. It represents my love for life’s little pleasures like repeating this comfortable and favorite jumpsuit of mine even thrice a week, sometimes 😄 It represents my love for shambas, farming and harvesting. In this case we were visiting Suraj’s beautiful and diverse shamba right outside the park. So many things I love about nature and what this country of ours has to offer. It’s a happy new month for me! Wish you all a great one!
With my type of work and schedule, 24 hours on, the best I can do is drink a lot of water and let my skin breath as much as possible. Slid into today’s Eve Women’s Magazine sharing about Self Care and the beauty products I swear by.
YOU’RE A LITTLE RAGGED BUT WE LOVE YOU AFRICA. CELEBRATING AFRICA EVERYDAY!
HELLO AFRICA, TELL ME HOW YOU’RE DOING 👋🏾