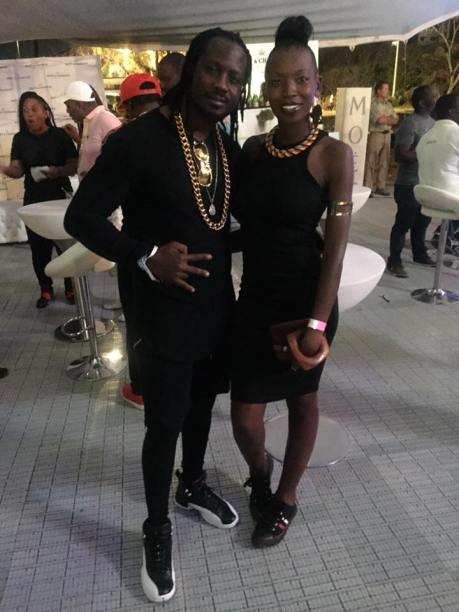 For someone who has attended so many events and concerts like I have, it was such a bummer that before last weekend – I’d never been to a Wizkid concert. I missed to see his debut performance in Kenya (December of 2014 in Nairobi) as I was away, working in Turkana.

Feel free to read my travel tales: To Turkana and Back: The Heat and Women (Part I)

Since then I’ve been ready to jump on any given opportunity to see Wizkid perform. It had taken so long. And even though I first met Wizkid last December while in Lagos, I still missed to see him in concert. You can only guess how happy I was when I first got word from my friend, Alex – the Marketing Manager of Moet Hennessy, East Africa, around two months ago before the concert, that Wizkid would be coming to perform alongside Chris Brown. The thought of the two performing, together, in Mombasa was so foreign to me that it was hard to imagine how a show of such magnitude could be pulled off. One thing I was sure of, however, was that if it happened, I’d definitely have to be there.

Fast forward to last weekend (Saturday 8th October). My trip from Nairobi to Mombasa was somewhat jinxed. Among series of unfortunate events, I nearly miss my flight thanks to an Uber driver opting to take a longer route for no reason. Accompanied by half of Sauti Sol and my babe Tomas, we are staying at English Point Marina on arrival. I leave for the concert at about 8:00 p.m. with the Ugandan crew – entertainment mogul and renowned artistes talent manager – Aly and top Ugandan artiste Bebe Cool. We are accompanied by their crew. We are hoping not to miss Navio’s performance – we don’t 🙂 The rest of the opening acts included Tanzanians: Vanessa Mdee and Alikiba and Kenya’s rapper Nazizi and Mombasa All Star Dancers, among others.

Before the Mombasa concert, I’d never met Bebe Cool in person, though I had seen him in a Ugandan club once.  I have however interviewed him for DStv.com via phone on a different occasion. While in the car with Bebe Cool and Aly on the way to the concert something magical happens. I strike a rapport with Bebe Cool. We won’t stop talking, comparing and contrasting the music industries that make the East African music circuit with a focus on the demise of Kenya’s one-time giant status. It was so enlightening yet baffling. As a professional journalist and publicist in entertainment/ arts and culture, I sometimes wonder if I would have been happier working in the entertainment industries of Tanzania or Uganda for the obvious reason that their artistes and industries are paid more respect. Additional to that, these industries have better structures and opportunities that have allowed artistes and those working in the arts industry to earn a living through their trade of choice. I have thought about how my life would have turned out if I were either born Tanzanian, Ugandan or was working in a different industry. It’s paradoxical that the industry that has dejected me severally is the same one that built some of East Africa’s biggest music acts. “It’s funny how the careers of huge Ugandan artistes like you and Chameleone started in Kenya,” how I start the conversation with Bebe Cool in car.

He starts to narrate his story to me, “I was brought to Kenya by Kawesa (sp) with a dream to work with Ted Josiah, who never worked with me. I was lucky to meet Ogopa DJs. [I blew up] after the first time we worked together in South B – and that played a historic part in my career. When [I am sometimes dejected by Uganda’s entertainment industry], I tell them that I can go back to Kenya because Kenya gave me my first opportunity.” It’s little wonder that Bebe Cool is just as patriotic to Kenya as he is to Uganda.

I tell Bebe that the love isn’t gone as some Ugandan songs and artistes like him are still getting a lot of airplay in Kenya, even more than some Kenyan artistes. “Hasn’t that changed yet?” He asks after which he deduces that the main problem of Kenya’s music industry is that artistes refuse to be challenged by their counterparts. Bebe says, “When Kenyan music started [infiltrating Uganda back in the early 2000s, we learnt and started to create differently. That turned tables around. If you sang as a Jamaican or a Congolese, we would strive to do it better than you.”

He shares with me his plans of how to bring back Kenya’s showbiz, while maintaining his own brand. I have concluded that I am looking to work with artistes as conscious as Bebe Cool. If all East African artistes had Bebe’s state of mind, think about how our industry would turn out … We both agree that for Kenyan artistes should and must give Kenyans a reason to invest in Kenyan music. They must give Kenyans reason to talk and believe in their art.