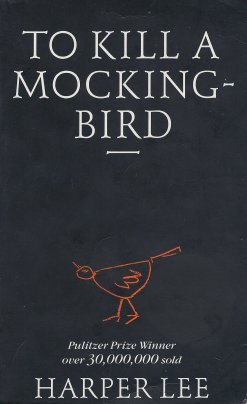 Set in a fictional town, Maycomb County in the 1930s, To Kill a Mockingbird by Harper Lee is an extraordinarily powerful book essentially about how one’s life is influenced by upbringing and society as a whole, and how that affects one’s view on bias, in this case—racism and societal segregation.

The book’s utter beauty lies in its narration by 9-year-old Scout Jean Louise, the assertive tomboy daughter of Atticus Finch, a white lawyer faced with the challenge of balancing single-parenthood and a demanding profession. Through Scout’s eyes, the reader walks inside her world revolving around her family, comprising: her father, elder teenage brother, Jem Finch and their nanny, Calpurnia (a Negro); school and how the conscious of a town affects her own.

Atticus has developed a strong relationship with his kids; so much that they call him Atticus or Sir (in dire situations); hardly ever Dad. The lawyer, an avid reader and man of wisdom encourages his children to always remain impartial in a world full of people with different opinions, preferences and beliefs. “If you can learn a simple trick, you’ll get around better with all kinds of folks. You never really understand a person until you consider things from his point of view,” he advises his daughter after a rough first day at school, words that haunt Scout up until an incident that happens to her later in life, becomes an embodiment of her father’s counsel.

When Atticus takes on a case to defend a black man charged with the rape of a white girl, Scout and Jem are ostracised by neighbours, kids at school and even extended family, all calling their father a nigger lover. Scout confronts her father wanting to know what it means and if he really is one. He says, “Ignorant, trashy people use the term when they think somebody’s favouring Negroes over and above themselves. It’s slipped into usage with some people like ourselves, when they want a common, ugly term to label somebody. I certainly am a nigger lover. I do my best to love everybody … It’s never an insult to be called what somebody thinks is a bad name. It just shows you how poor that person is, it doesn’t hurt you.”

The case of a white man defending a black man is unheard of in Maycomb County. It’s an intriguing court battle that brings together a people in a battle of the better colour, instead of what should have been justice. In a case closely followed by citizens entangled in group think, it’s no surprise that Atticus’ children come out among few souls in the town neutral to the case.

To Atticus, it’s not a crime to be of whatever race, colour, belief or association, and nobody should counter what you stand for. When he gets his children air rifles as gifts, it’s the first time Scout hears her father say that it’s a crime to do something—to kill a mockingbird. She asks Miss Maudie (a neighbour) about it. “Mocking birds make music for us to enjoy. They don’t eat up people’s gardens, don’t nest in corn cribs, they don’t do one thing but sing their hearts out for us. That’s why it’s a sin to kill a mockingbird,” she says.

While Atticus Finch defends Maycomb’s real mockingbird, the county’s deep-rooted racial differences, hypocrisy and sycophancy is exposed. Atticus is criticised for defending a nigger yet ironically still celebrated as Maycomb’s top attorney. Regardless, his initial worry is his integrity and what will be left of it for his children to emulate or despise after the case (which later takes an unexpected turn).

To Kill a Mockingbird’s key message is skillfully packaged in subtle humor. As the book celebrates its 50th anniversary this decade, it still transcends generations and societies. Harper Lee, an inspiring woman, gave the world a timeless and beguiling book that unchains Django and ultimately, inspires readers to reason beyond society’s group think mentality. We are reminded to respect songs of those who sing, even though we might not dance to their tunes. For in one way or the other, we are all mockingbirds flying and singing, sometimes dreaming that someone will listen, but mostly hoping that we’ll live to be heard.

BONUS: Here’s my review of Go Set a Watchman – the sequel of To Kill a Mocking Bird

The character of Atticus in the book has been humanised by many over the decades, and when some felt like the lawyer has passed on, his legacy never did. The book, his epitaph and tribute always remain celebrated. Read Atticus Obituary here.

12 thoughts on “To Kill a Mockingbird- Harper Lee (Book Review)”