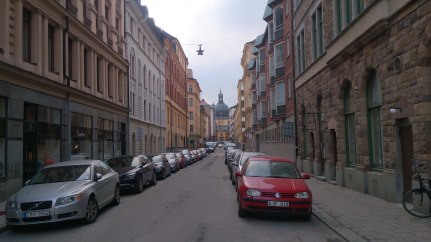 It’s been a few weeks since my trip to Sweden. I think it was so cold that my mind has since, still been thawing. But thankfully I now am good to recollect all my thoughts 🙂

Last November while in Netherlands, despite having someone to hug me during my entire trip 😉 I found Amsterdam so chilly – winter was kicking just kicking in.

Unbeknownst to me, that was preparation for my arrival in Sweden in a few months (March 2015). These were the last days of winter but they teach me what it really means to be cold. I had never experienced such cold that requires life to only exist with on and a load of clothes on, literally making you feel like you are forever carrying a load on your body. The streets are empty and I am told it’s because of the cold weather.

Hakuna watu #Stockholm ama ni baridi? 😂 Parading these streets taking puctures & videos like I own them! Now off to No. 18 before tonight's dinner plan with my PR girls from Story Relations 👊 #Sweden

Interestingly, I receive such a warm welcome for such a cold country. The first people I meet as soon as I arrive at Bromma airport are the usual hungry taxi men. I ask one of them if I can use their phone to call Sylvia (my friend and host). Her phone is on voicemail so I promise the kind taxi man that we will take his taxi if at all I find her and we need one. I end up purchasing a week – long bus ticket that I start to use asap. As we walk out of the airport, I don’t want to glance at the taxi men as I am headed to the bus station. Sylvia tells me that their kindness is unique and unlike most taxi operators. When I finally steal a glance at them as we leave to the bus stop, they are all standing tall, smiling at me and waving goodbye.

I am lucky the sun comes out on my first day, as soon as I arrive. It’s so beautiful to see snow for the first time. Sylvia couldn’t be happier to share my first-snow-moment with me. 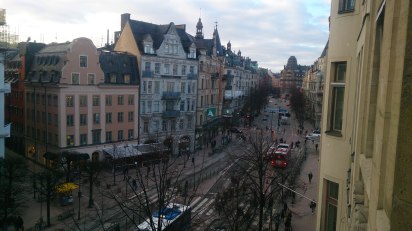 As we get into the city centre, I am amazed at Stockholm’s beauty. First, the buildings in Stockholm are located between Lake Malaren and the Baltic Sea. I find something I totally love about Europe’s architecture here – history that dates back to the 13th century, if not earlier. Sweden’s list of islands fantasizes me and sometimes while driving around town, I can’t imagine what a beautiful view those who live on these islands have every morning, especially during summer time. One building even has its top shaped like a ship.

I find the design of some Stockholm buildings quite similar to Dutch architecture. Sylvia tells me that a lot of Swedish architecture has foreign influences. Indeed, during the 1600s and 1700s, foreign architects were recruited to build the city and in recent periods Swedish architects often drew inspiration from their tours to Europe. 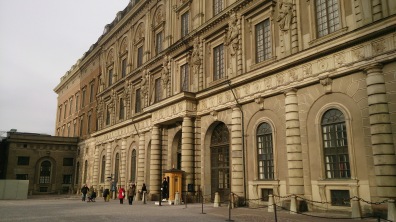 On a different day we pass by the eighteenth-built Swedish Royal Palace, one of the largest palaces in Europe. This is were His Majesty the King of Sweden resides. It’s so grand with 600 rooms and the whole shebang. I am wowed by the fact that it’s open to the public. As we walk in and out its lovely court area, Sylvia tells me that national events or announcements are actually made by the King, many times, here. Its Italian Baroque style, coronation carriages and magnificent coaches from the Royal Stable make me feel like I just walked into Disney World. I miss to see the parade of soldiers but indeed there’s that one soldier by the entrance who is so still, she looks like a statue.

3 thoughts on “Taking stock of Stockholm: Part I”

I dream in technicolor! 🌈 On the night before my wedding day, in my dream I saw several struggling mothers come together to form a household and boma that would help all people and visiting relatives. At the end I saw my mum and the dream had a summary and moral that mothers need to be celebrated more. They aren’t celebrated enough. This should be an everyday affair.
Walking into May majestically - like a champ! 💪🏾 Because I am! How better way on this day of celebrating all things hard earned labour and success! You get it - shine all the way to the top but don’t forget to be thankful.
Raha Jipe Mwenyewe 🥰🥰🥰
My people please check out the remix of "Easy" by @gemmamusic_ feat. @iamchimano out now! ❤
What a wonderful season of successful meetings and all that I planned. It all started with embodying positive vibes from the very start.
Sunday Sermon.⁠