I am extremely lucky that Fela! The Broadway Musical in Concert is showing in Lagos while I am in town as I am coincidentally also on my journey to retracing the legend of Fela Kuti. I’ve planned to watch the concert together with my friend Abi, colleague at Gidi Fest Korede and end up going there alongside Nigerian singer Adekunle Gold – who BTW produces such unique and timeless music.

I am excited to be catching the award-winning broadway musical showing in Lagos over Easter weekend. I can’t believe I am about to watch it! Just a few months ago, I was watching a documentary on the inception and creation of Fela! Broadway Music on Netflix not knowing that I would ever catch part of the international show in this very Africa.

Read the first parts of my Retracing Fela Kuti series:

As I arrive at the Eko Convention Centre alongside Adekunle Gold on the show’s opening night, I don’t know what to expect, as I have never watched any renditions of Fela’s music live. I am delighted at how splendid the cast and crew look and feel. Their traditional tribal costumes readily brand this a Fela show. Sending a big shout out to the Set and Costume Designer Maija Garcia! 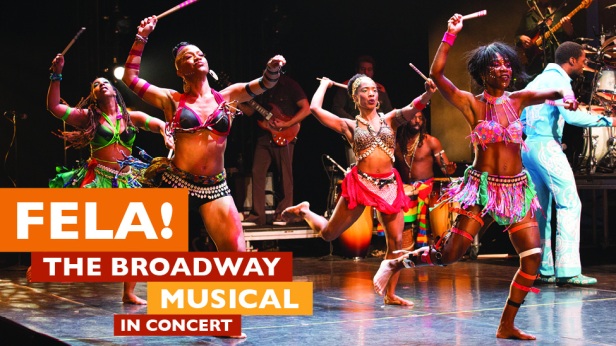 I am awed as the stage lights up in glorious music performances. Just like Fela’s dancers used to, the concert’s singers/dancers are gyrating their waists provocatively in a submissive demeanor towards the concert’s ‘Fela’ and the instruments of the band. Yes! They are dancing by and with instruments like the big sax and drums. It’s such a show off of a woman’s sexuality, sensuality and power. The screen at the back of the stage is displaying olden video footage of Fela or scenes in Nigeria alongside iconic newspaper headlines depicting the life and times of the man. Some of the headlines read: ‘Fela returns to Lagos’, ‘Fela enflames students – gov’t threatens action’ and ‘Nigerian Government: We will crack down’. 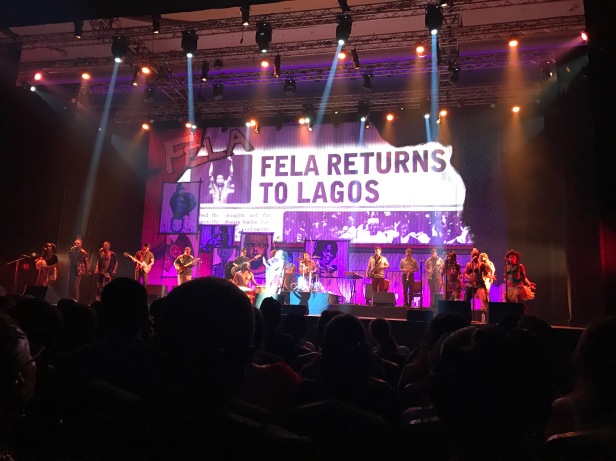 The experience is an exploration of Fela’s celebrated performances that married the controversy of his life. The musical’s booklet writes about the temperature and vibe of what used to be a Fela Kuti performance at his club – The Shrine:

“Fela actively engages in a humorous, often caustic give and take, poking fun at his audience and a wide variety of topics – first and foremost – the corrupt Nigerian generals and the large mutli-nationals and oil companies that keep them in power. So it’s not uncommon that before dawn, when the concert finally starts to wind down, the Army might show up to harass Fela, his Queens, band and audience, or depending on what’s been said or done, haul them off to jail to be beaten and tortured…” 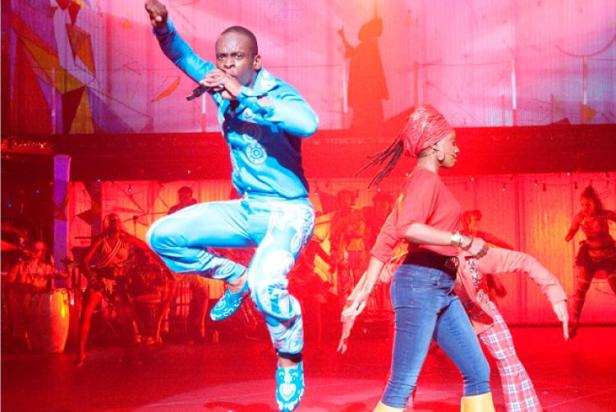 Sahr Ngaujah who plays Fela Anikulapo-Kuti does carry himself with charisma and poise. At the start, it seems as if Lagosians aren’t warmed up enough but Sahr taunts them in Pidgin, interrogating political innuendo till the crowd cheers up and soon starts to respond. Sahr, an American with Sierra Leonean ancestry, is a theater director and actor based in Netherlands. Other cast members include Afi Bijou, Olutayo Bosede, Lollise Mbi, Shawn Fisher, Iris Wilson, Rue Brown and Jason Herbert. Together with the 9-man band and female percussionist, the entire cast and crew truly take us on a journey to discovering the greatness of Fela’s music and how it embodied spirituality, soul and strong messages.

Fela Kuti was a political activist and revolutionary musician, who was known to also be anti-westernization. On the next day, Abi (my Nigerian sister) and I get into a heated review of the show. We wonder what Fela would have thought about the cast and crew made up of various nationals among them Americans knowing that he was also anti-westernization. We both think that he’d probably have mixed reviews himself. He must have wished for such a show displaying and reliving the spirit of his music to be produced and performed exclusively by Africans. Well … I think they did an exemplary job, and because of them – I have the honour of having experienced a part of Fela in concert.

Fela Kuti was a Nigerian multi-instrumentalist, musician, composer and the pioneer of the afro-beat genre. He was also a human rights activist and political maverick known to have been a staunch Pan-Africanist. He is celebrated as one of Africa’s most influential artistes of all time. By the time the show is over, both Adekunle and I are left speechless and the crowd is up and dancing after demanding for an encore. Korede asks me after, “How was it?” I can’t really explain or properly blog about it.

Read Part 4 and the last of my Retracing Fela Kuti series: Femi Kuti Live at The New Afrika Shrine, here

Walking into May majestically - like a champ! 💪🏾 Because I am! How better way on this day of celebrating all things hard earned labour and success! You get it - shine all the way to the top but don’t forget to be thankful.
Raha Jipe Mwenyewe 🥰🥰🥰
My people please check out the remix of "Easy" by @gemmamusic_ feat. @iamchimano out now! ❤
What a wonderful season of successful meetings and all that I planned. It all started with embodying positive vibes from the very start.
Sunday Sermon.⁠
I love life's surprises. Most times God is laughing at our plans. Speaking of which, best things in life are free, infinite and priceless ❤️ Don’t let them pass you.