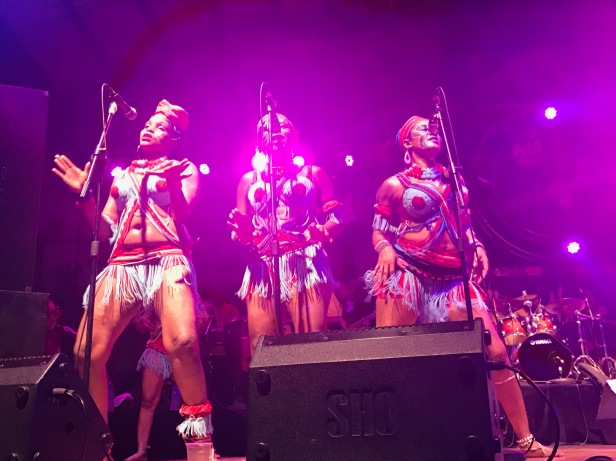 I’ve been to the Shrine on a no-show day and have been waiting all week to come see Femi Kuti live, my first time to see him today (Sunday). I arrive at the Shrine accompanied by my friend Abi – it’s about 9 p.m. However, the street outside the Shrine is buzzing as if it is a market day in Balogun. There is massive traffic (cars and people) outside. We even have to pack a distance from the entrance.

Still not over watching @femiakuti live at the Shrine. This is Bang!💥 Bang! 💥 Bang! 💥

On arrival at the gate, we are met by my friend Ade who works here. He tells us that the show started at 7 p.m. and will be ending in about an hour. We pay 50 Nairas each and get into the venue. I can see a few familiar faces from my first visit to the Shrine. They look at me like: “She is back!” Our eyes and heads nod in synchrony.

We immediately move close to the stage, where Femi Kuti is performing. I am wowed by his ensemble! There are twelve dancers (all female) and twelve instrumentalists on stage. Two other female dancers are gyrating like free animals each locked in cages situated right in the crowd. This is such an experience!

Hearing Femi play live sounds like Fela to me. It is heavy and the band’s horn section stands out. It’s quite rhythmic and danceable. There is a white familiar-looking man in the crowd. I am staring at him wondering who he is or where I saw him. Later on Chimano points out to me that that was the legendary Rikki Stein, a British music industry executive known for having been Fela Kuti’s manager from 1983 till his death in 1997. I’ve seen him in a couple of documentaries.

Abi recognizes two of Fela’s granddaughters, one of the dance floor and another we see outside the venue. Wrapped up in African beads and big dangling rings/bangles, this one seated in a big SUV looks like a tribal goddess – Abi comments: “You can just tell that she is from Fela’s roots.”

The booklet from Fela! The Musical Concert writes what it was like to experience a night in Fela’s actual Shrine:

“No two nights are ever the same. There’s always plenty of Fela music but also a seemingly random mix of consciousness-raising lectures, gyrating female dancers, pamphleteering. Fela has created a new kind of music, Afrobeat-pounding eclectic rhythms (drawn from music traditions around the globe) mixed with incendiary lyrics to openly attack the corrupt and repressive military dictatorships, that rule Nigeria and much of Africa …”

In many ways, Femi Kuti embodies the spirit of his father. His songs address politics and politicians. In just an hour, I feel so overwhelmed by the spirit and vibes at the Shrine. On our way out, we pass by a few shops where I buy myself a Fela vest, portrait and albums. I am ready to leave. I feel like I am in church and not particularly ready for the sermon. Have to come back here.