I have ardently followed Nelson Mandela’s history from an early age. I remember that as a little girl I wondered what Nelson Mandela had to do to be so respected across the world, and become a whole country’s saviour and arbitrator. When the Nelson Mandela movies started coming out, I was even more enthralled by his legend. I still wonder what sort of man could have had such a strong will to persevere, fight and succeed, and at the same time have such a big forgiving heart. I always knew that if I found myself in South Africa I would have to visit Nelson Mandela’s first home – today known as The Mandela House or The Mandela House Museum. It’s the first place I ask how far it is, as soon as we arrive at O.R. Tambo international airport.

On a fine Tuesday morning, Tomas and I set off to retrace Nelson Mandela’s roots. We first visit the Apartheid museum (blogging about this next), which has an entire section dedicated to Nelson Mandela. However, I can’t wait to get to Soweto (South Western Townships). On our way, I am having thoughts of all the South African movies I’ve watched in the past, which were either biopics of Nelson Mandela, or reenacted and touched on the topic of Soweto’s infamous uprising. They included Safarina, Long Walk to Freedom and Cry Freedom.

As we pass by two of South Africa’s biggest stadiums, our Uber driver mutters, “This is where we held the World Cup.” It’s obvious that FNB Stadium’s grandiose architecture, and South Africa’s feat as the first African country to host the World Cup is another focal point of their national pride. We also get to see Orlando stadium, where South African rapper Cassper Nyovest recently filled in concert.

South Africa’s infrastructure is quite impressive! Even the road to Soweto is well tarmacked. It’s about thirty minutes drive to Soweto from Northern Park Way, where the other museum is situated. When I finally see signs leading us to Soweto, I start to wonder how far street rioters would have to walk to get to Johannesburg back in the day … Looking into the horizon I see that we are approaching a blanket of small houses packed alongside each other. At the traffic stops, we start to see caracaras (their matatus), and boys in the hood walking in between the roads, some hawking paraphernalia and others just idling. “Are we in Soweto?” I ask the driver. “Yes – ma’am, we are,” he replies, asking, “Is this your first time here?”

I blogged about bringing together the rappers: Octopizzo (Kenya) & K.O (South Africa) in a conversation about the role of music in defining the African narrative. Read all about it.

I know we have arrived at Mandela’s House as soon as soon as we get to Vilakazi Street. It’s a beehive of activities and the mecca of tourists you’d imagine it to be. There are many street hawkers and vendors along the street, selling soda, beads and Nelson Mandela memorabilia and souvenirs—it’s so wonderful! There are also some restaurants and people’s homes right along this street.

Nelson Mandela’s house is number 8115. After paying in, I opt for us to walk around without a tour guide. I hate when I am trying to take in some piece of history and someone is busy explaining to me other things ahead of my thoughts. Nelson Mandela’s House is small and modest. It has three rooms and a tiny kitchen. In the bedroom, there is a lone well-made bed that I overhear the tour guide talking about, “This isn’t Nelson Mandela’s actual bed. He was taller. This is similar to the one his daughters would sleep in.” There is an area with an audio playing with Winnie Mandela talking about her good times, and torturous moments in this house. She was also harassed by security forces and imprisoned, severally.

Build in 1945 – this house is where Nelson Mandela lived with his first wife Evelyn Ntoko Mase and their son, till 1958 after their divorce, after which his second wife Winnie Mandela moved in. During the years that lead up to Mandela’s 1962 sentence to life imprisonment, he lived here while actively participating in South Africa’s struggle for freedom, a situation that had him stay underground severally. 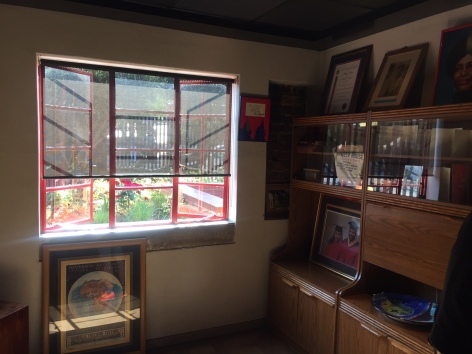 It’s special and humbling to step into what was Mandela’s personal room/study. Here are some of his beloved items and awards, neatly stored and protected only by a glass cabinet. I start to imagine how in this very room a great South African man would sit, read and write. My imagination relives how in collaboration with fellow freedom fighters and activists, the man would ponder to formulate strategies on how to set his country free. There are several letters and notes handwritten by Nelson Mandela here too. Winnie Mandela’s dope ass boots are also in the cabinet – the babe was stylish!

After being incarcerated at Robben Island for twenty-seven years, Nelson Mandela returned home, here, on 11th February 1990. He recalled in his memoir – The Long Walk to Freedom, “That night I returned with Winnie to No. 8185 in Orlando West. It was only then that I knew in my heart that I had left prison. For me, No. 8115 was the centrepoint of my world, the place marked with an X in my mental geography.” It’s also a quote written at the entrance of the house. For some reason, I only see it when we are leaving. It reminds me of the importance of our journey here.

My visit to Nelson Mandela’s house reminds me of the adage – it doesn’t matter where you are from but where you are going, and the steps you take on a daily basis. It’s a reminder of hope, and that home is where your heart is at rest and peace.

The Soweto Heritage Trust has done a great job at renovating, and taking care of the house. The visit doesn’t feel like a museum – it’s so personal. We don’t stay too long, only about twenty minutes. Paying homage to Mandela’s personal space, I refrain from taking too many photos – almost as if I really was a guest in his home, and he was present, watching pensively.

BONUS: You might enjoy reading my popular blogs on museums:

1. A mystery into Lord Egerton’s Castle

2. Visiting the Louvre – Viewing The Monalisa