On my birthday (Sept 4th) this year – I wanted to do it small and intimate. I wanted peace and silence. I wanted no crowds or surprise parties but to witness the great Wildebeest Migration—World’s Seventh Wonder. My super sweet girlfriend Smiles, and being in the Maasai Mara gave me a week to do this.

On the morning of my birthday, I decide to pass on a balloon ride at 4:00 a.m. to sleep in. Yes. Imagine that. At about 10:00 a.m. Smiles comes from work, photography during balloon rides. She rushes in, “Hurry! Out! The wildebeests are about to cross the river,” she in a frenzy. “I haven’t even showered!” I retort but she isn’t hearing any of that. “Oh! It is your birthday!” She remembers, gives me a hug and we are off. Hopping into her Land Rover, we are headed towards part of the Mara River where a Safari Guide just tipped us of a potential wildebeest river crossing.

When we arrive, several Safari vans and tourist Land Rovers are parked close to the riverbank by the dirty brown water. We get a fairly nice spot. All the cameras and binoculars start to come out. I thought our camera’s lens was boss but boss! Suddenly, I see lenses so big; they could easily take a crisp shot from a mile away. I am so excited just by the thought that I will, on my birthday, witness a scene off Nat Geo, live. I can’t wait till the wildebeests start to jump and run across the river. The vehicles aren’t too far from each other and shouting in the park is prohibited so I can perfectly hear most foreign tourists whispering and asking: “What? Where?” Some of them have never even seen zebras, so this should be exhilarating for them too.

I’ve got binoculars on and Smiles has the camera. We alternate these two – our most important tools while outside the house at Mara. I can see a herd of wildebeests on the other side of the river. Unbeknownst to me, this is going to take loooooooong. It takes the herd of wildebeests led by zebras at least 30 minutes to move 3 steps towards the river (there are at least 20 steps to the water). We’ve been here for more than two hours already. I’ve seen hippos, crocodiles and vultures, all lurking in and around the Mara River but not a single wildebeest crossing the river.

An hour later, the wildebeests and zebras stealthily advance towards the water. Finally! I can’t wait to witness the dramatic crossing, you know just like it happens in the documentaries. We’ve got all the cameras ready! Finally! The first and bravest wildebeest starts to insert their hoof into water and the others follow suit, slowly. Suddenly, the vehicles from across the river start their roaring engines to move closer to the scene, for the tourists to get better shots and a view of the spectacle. This annoys us so much because the sounds start to distract the animals, now starting to retreat.

I still pray so hard that they cross. And just as the dramatic cross attempts to begin, a more dramatic thing happens – a leopard jumps onto the herd, across from a nearby bush. It’s serious chaos as the wildebeests and zebras run fast, drawing back into the clearing away from the Mara River. Standing on our Land Rover’s rooftop, through the binoculars I can see thousands of wildebeest herd formation, adding a beautiful darkness to Mara’s horizon. It’s my birthday and I don’t think I want to spend the whole day waiting on wildebeests to cross a river. “Let’s just go home,” I tell Smiles, who reluctantly drives us off half-heartedly. She really wanted me to see the show I had anticipated on my birthday. But I have already seen the wildebeests migrating from atop a balloon ride and seen hundreds of them run in full speed when we’re driving across the park. It’s still breathtaking.

Yesterday was spectacular. Witnessed part of the #wilderbeastmigration early in the morning in Mara atop a balloon ride. And then the zebras were also there. You can only see this world's 7th Wonder in #MagicalKenya or Tanzania's Serengeti.

We head home, where Smiles’ hubby Danny and his friend John are preparing a barbecue for my Bday Late Lunch. I manage to steal some time to read all the awesome birthday messages left by friends and Skype with an important someone before lunch. The lunch is perfection – the best chips and burgers in the entire Mara. We sit at the patio, overlooking a beautiful view enjoying the yummy meal. “Do you realize you’re dressed like you’re going to a party and you’re wearing lipstick in the Mara?” John points out, looking at me in awe. But with every bite and crunch of my food and sip of the sweet white wine – I realize that my life is really about nothing but what simply makes me tick—Life’s Little Pleasures. Spending my whole morning doing nothing but waiting on wildebeests to cross the river; wearing my fancy dress and lipstick how I like it, not caring that I am in the jungle 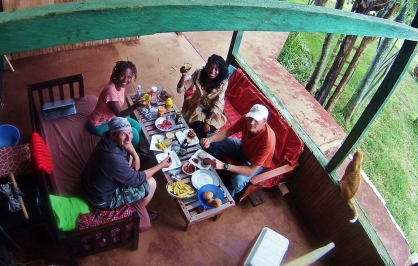 Right after lunch, there is a huge down pour (blessings in the African culture). I take a nap. Late evening, we head over to Serena Mara for sauna and a massage. After dinner, later in the night, Danny, Smiles and John teach me how to play Euchre, a trick-taking card game commonly played by four people in duos. I am paired with Danny and we end up winning! “You’re so lucky!” John keeps saying that about my naive moves, that always knock his opposing team out. Well, I consider myself lucky to share a birthday with my beloved late Dad and to have celebrated my birthday this year, alongside such loving people 🙂

I couldn’t thank you Smiles and Danny enough for the joy our friendship has continuously brought into my life. Thanks for making my Bday this year AMAZING.

BONUS: The Serengeti Mara ecosystem consisting of Tanzania’s Serengeti, Kenya’s Maasai Mara, surrounding conservancies and ranches forms the stage for the biggest show of wildebeest migration, yearly. All migrations differ in exact time and character. Food and rain remain a constant push factor despite the mystery surrounding why wildebeests migrate and cross Mara’s deadly waters, even when their current location has perfectly lush grass and water. This is the World’s Seventh Wonder.

I also wrote for DStv some 5 fun facts about the wildebeest migration Read my complete Bday in the Wild series, tales from Maasai Mara below:

Bday in the Wild: To Maasai Mara: (Part I)

Bday in the Wild: Atop a Hot Air Balloon (Part II)

All photography: yours truly, except for the first by Smiles. And yes, she witnessed that.

3 thoughts on “Bday in the Wild: The Wildebeest Migration (Part III)”